Illegal Immigrants in Virginia to Get ‘Driver Privilege’ Cards 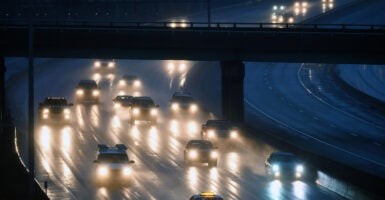 Illegal immigrants will be able to apply for driver privilege cards in Virginia starting Jan. 1, 2021, according to the state’s Department of Motor Vehicles.

Advocates of the permits claim the issue is in the interest of public safety, NBC Washington reported. Virginia’s General Assembly, which has a Democratic majority, passed the legislation allowing the cards in March.

Noncitizens will be able to apply for driver privilege cards if they are a resident of Virginia; if they have reported income from Virginia sources in the last year or were claimed as a dependent; and if their driving privilege is not suspended or revoked in Virginia or elsewhere, according to the DMV.

Virginia’s new driver privilege cards for noncitizens bring a mix of relief and anxiety to advocates of immigrants rights.https://t.co/SjvGii69Xa

The state-issued driver privilege cards cannot be used for entering federal buildings or boarding flights since they are not REAL ID compliant, according to the DMV. Applicants are also not eligible to receive commercial driver’s licenses or formal identification cards.

Driver privilege card applicants must provide two forms of identification and two proofs of residency in Virginia, according to the DMV. Applicants also have to show proof of their Social Security number or their taxpayer identification number and their tax return documentation.

Applicants must pass a vision test and some will need to take a two-part road knowledge exam and driving test, according to the DMV. The exams are only given in English, so applicants are allowed to have a translator present.

The driver privilege card is valid for two years and the application fee costs $50, according to the DMV.

Supporters of the permits are concerned the identification will make illegal immigrants more susceptible to detention by Immigration and Customs Enforcement officers during traffic stops, the Richmond Times-Dispatch reported.

The cards look slightly different than normal Virginia licenses and provide information about the illegal immigrants to the DMV.