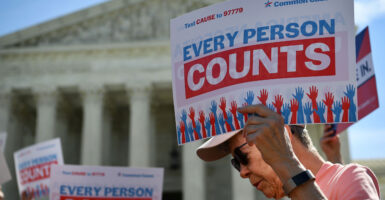 Demonstrators rally at the Supreme Court in Washington on April 23, 2019, to protest a proposal to add a citizenship question on the 2020 census. On Friday, the justices put off a final decision on the issue. (Photo: Mandel Ngan/Agence France-Presse/Getty Images)

So, will illegal aliens be included in the population count used for apportionment of the House of Representatives? We still don’t know.

In a 6-to-3 decision Friday, the U.S. Supreme Court held that it was too early to make a decision on the issue and that New York and the other states challenging the Trump administration did not have standing (yet) to sue.

At issue in Trump v. New York was a memorandum issued by President Donald Trump to the secretary of the Department of Commerce (where the Census Bureau is housed), directing him to exclude illegal aliens from the population to be used for apportionment of the House of Representatives “to the maximum extent feasible.”

Under federal law, the secretary presents the president with the base population to be used for apportionment. The president then applies a statutory formula to that population to determine the number of members of the House to which each state is entitled.

New York sued over the memorandum and obtained an injunction from a district court judge to prevent the directive from being followed.

The Justice Department had argued that the president had the authority under Supreme Court precedent to determine whether a person should be deemed an “inhabitant” or “usual resident” of a state for purposes of determining the population and, therefore, the political representation of that state in the House.

But the district court judge held that the president did not have that authority and that the memorandum “chilled” illegal aliens from responding to the census.

The lower court held that that degraded the quality of census data used to allocate federal funds to the states, and that the president violated the federal statute governing the census by ordering the secretary to provide two different sets of numbers.

However, the conservative majority on the Supreme Court issued a per curiam (unsigned) opinion vacating that judgment and instructing the district court to dismiss the lawsuit—but without deciding the merits of the substantive constitutional and statutory issues involved.

Instead, the court noted that the census count is already complete and that the “case is riddled with contingencies and speculation that impede judicial review.”

Whether the commerce secretary can even implement the directive from the president, the court said, “is no more than conjecture,” since it’s unclear whether there are sufficient administrative records on illegal aliens in the federal government that can be matched with “census data in a timely manner” to provide a number that is not just an “impermissible” estimate.

The court also noted that, with regard to the federal funding claim by New York, the Justice Department claimed that federal funds are tied to data derived from the census, not necessarily to the apportionment population, which is a separate number from the entire population of the country reported by the Census Bureau.

Moreover, the court stated, the injunction entered by the district court “underscores the contingent nature of the plaintiffs’ injuries,” since it prohibits the secretary from informing the president of the number of illegal aliens, which not only affects the president’s authority under the Opinions Clause of the Constitution (Art. II, § 2, cl. 1), but reveals that the supposed injury is the action that “the secretary or president might take in the future.”

So, according to the majority, so far, the plaintiffs have suffered “no concrete harm from the challenged policy itself, which does not require them ‘to do anything or to refrain from doing anything.’” Thus, the resolution of the dispute is “premature,” at least according to the six members of the court’s so-called conservative bloc.

In other words, the court said New York had not yet been injured by a policy that might or might not actually be implemented. So, New York didn’t have standing to bring the lawsuit in the first place, and there are so many contingent unknowns at this point that the case is not “ripe” or ready to be decided.

Most importantly, however, the majority expressed “no view on the merits of the constitutional and related statutory claims presented.”

It should come as no surprise that Justice Stephen Breyer, joined by Justices Sonia Sotomayor and Elena Kagan, dissented, arguing that New York has standing since the policy, if implemented, would harm the state, and that it is ripe for resolution.

The dissenters said they would decide the case in the plaintiffs’ favor on the merits because the plain meaning of the statutes, historical practice, and uniform interpretations of all three branches “demonstrate that aliens without lawful status cannot be excluded from the decennial census solely on account of that status.”

What’s so odd about these arguments by the three liberal justices is that illegal aliens are legally prohibited from voting, making donations to federal candidates (including individuals running for the House of Representatives), or running for Congress.

Yet, the dissenters think that illegal aliens must be included in apportionment, distorting the political power of the states in the House of Representatives, giving states that obstruct federal immigration law and attract illegal aliens through sanctuary policies more representation in the House than they are otherwise entitled to.

That is, of course, the real reason that states such as New York are trying to prevent this from happening. A study by the Congressional Research Service in 2015 analyzed what the representation would have been in the House of Representatives after the 2010 census using only the estimated 2013 citizen population, while excluding noncitizens.

So, what this case is about is pure political power and whether U.S. citizens will be disenfranchised and have their votes and representation in the House of Representatives diluted by aliens who are in this country illegally. That’s the bottom line.