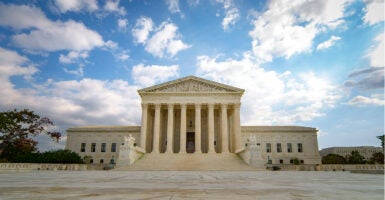 The Supreme Court threw out a federal district court’s ruling that had rejected a Colorado church's challenge to the state’s restrictions on houses of worship Dec. 15. (Photo: Mike Kline/Notkalvin/Getty Images)

In an unsigned decision, the court threw out a federal district court’s ruling that had rejected High Plains Harvest Church’s challenge to the state’s restrictions on houses of worship, according to the Star Tribune.

Three of the liberal justices who dissented emphasized that Colorado had already lifted the restrictions on houses of worship, noting that the state had amended its public health order to remove capacity limits on houses of worship “in response to this Court’s recent decisions,” according to the Star Tribune.

The Supreme Court has sided with a Colorado church challenging the state’s capacity limits for houses of worship. Justice Kagan leads the liberal trio in dissent, arguing the case is moot. #SCOTUS pic.twitter.com/S2gIv4BLxR

“High Plains Harvest Church has sought to enjoin Colorado’s capacity limits on worship services,” Justice Elena Kagan wrote in her dissent, joined by Justices Stephen Breyer and Sonia Sotomayor. “But Colorado has lifted all those limits.”

“Absent our issuing different guidance, there is no reason to think Colorado will reverse course—and so no reason to think Harvest Church will again face capacity limits,” Kagan continued. “When ‘subsequent events’ thus show that a challenged action cannot ‘reasonably be expected to recur,’ a case is well and truly over.”

The case is one of many involving religious freedom that have come before the Supreme Court this year. D.C. Archbishop Wilton Gregory filed a lawsuit Friday evening against D.C. Mayor Muriel Bowser, accusing the Democrat of “arbitrary” and “discriminatory” restrictions on churches ahead of Christmas.

“Under both the First Amendment and the Religious Freedom Restoration Act, the District’s arbitrary, unscientific, and discriminatory treatment of religious worship is illegal,” the lawsuit said.

Gallup polling released last week found that only those who attended religious services weekly saw a positive change between 2019 and 2020 in how they rated their mental health. No other demographic group in the Gallup poll saw a percentage increase in rating their mental health as excellent.

“Houses of worship and religious services provide so much more than just a weekly meeting place—they are where so many Americans find strength, community, and meaning,” Caleb Lyman, the Becket Fund for Religious Liberty’s director of research, told The Daily Caller News Foundation Dec. 9.

“Findings from this year’s Religious Freedom Index—that 62% of respondents said that faith had been important during the pandemic—align with Gallup’s findings on the importance of religious services to Americans’ mental health,” he added.