How the Chinese Communist Party Robs Children of Their Religious Faith 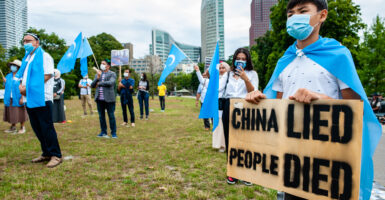 A Uighur boy displays a protest placard against China during an Aug. 8 demonstration in The Hague. (Photo: Ana Fernandez/SOPA Images/LightRocket/Getty Images)

Ann Buwalda is the executive director of the Jubilee Campaign, a Fairfax, Virginia-based human rights and religious freedom advocacy organization.

The U.S. State Department on Dec. 7 designated China a “country of particular concern” for its systematic, egregious, and ongoing violations of the religious freedom of its citizens.

The Chinese Communist Party has rightly been under scrutiny for its persecution of religious groups, including the internment of Uighurs in concentration camps in Xinjiang and the organ harvesting of Falun Gong practitioners, as well as for arrests and imprisonment of followers for reason of their practice, the destruction of church buildings and symbols, and the arrest or intimidation of Christians holding private Bible studies.

Not as well exposed, however, is the persecution of China’s children.

At a recent event on the sidelines of the U.N. General Assembly’s Third Committee session, the Jubilee Campaign—together with the Coordination of Associations and Individuals for Freedom of Conscience—brought the untold stories of Chinese children’s experiences of religious persecution.

The event exposed the fact that the Chinese Communist Party has utterly failed to uphold its treaty obligations under the Convention on the Rights of the Child, to which China is a signatory.

While entire religious communities have been persecuted in China because of their religious and spiritual beliefs, children have suffered tenfold.

The government has separated children from their parents and has threatened to beat the children if the parents do not renounce their faith. Government authorities have even threatened parents of adopted children that they will forcibly take away those children, return them to their original families, or put them up for adoption again if the family does not give up its beliefs.

In addition, in keeping with the 2018 Revised Regulations on Religious Affairs in China, local authorities have interpreted the regulation to ban attendance for all children at churches and other houses of worship, as well as to prohibit children from attending any religious activities, such as religious summer camps, or religious instruction, such as Sunday school.

David, 21, a Christian, reflected in a public letter published by ChinaAid that he witnessed his father, a preacher, being hustled away for interrogation. Authorities would harass his parents and threaten David’s safety in order, he said, to “force my parents to give up their faith and to give up their service at the church.”

At the U.N. event, another Christian, “E.L.,” 18, stated that government officials threatened his father, a pastor, saying that they would hire men to go to E.L.’s school to beat him up publicly.

Children whose parents are abruptly detained and imprisoned for their faith and church leadership suffer from the overwhelming absence and family instability.

That contradicts the Chinese Communist Party’s commitment to the United Nations in pursuing its Human Rights Council candidacy of “putting children first.” These state actions have the opposite effect and take no consideration of the best interests of the child.

What makes the state raids on gatherings of children from religious minorities additionally concerning is that the arrests are arbitrary, not based on any crime according to international law.

While my dad was taken away, I had a different birthday. Since my dad wasn’t home, he couldn’t celebrate my birthday for me. My mom invited some friends from church to home to celebrate it together.

By coincidence, my dad called my mom in the evening when we had just finished eating. My dad couldn’t call people whenever he wanted to while in the prison. He had to make an application, and … had to submit it first. Then they will decide when to let my dad make a phone call.

Right on my birthday, my dad got to call my mom for around 10 minutes. My mom was very excited about all of this. We all believe it’s God’s blessing.

My mom gave me the phone and asked me to talk to my dad because it was my birthday. I didn’t know what to say, so I asked if he could sing me a ‘happy birthday’ song, and so he did. At the end, we both burst into tears.

While my dad was away, I always encouraged myself that I could make it through. At that moment, all of the sad feelings came to me. I started to realize how different my life was and how naive I was trying to handle it by myself.

It is the most normal thing for a kid to hear that from his dad on his birthday, while it was the most special thing for me in that period. They harmed my childhood experiences by separating my dad away from my family.

One young woman, “X.X.,” the 18-year-old daughter of a Falun Gong practitioner, reflected on how little of her childhood she was able to spend with her family due to her father’s prolonged imprisonment.

“My dad was sent to prison for his faith. He died in the hospital and left us forever. I only saw my father twice. The first time, I was 7 years old. We met him in prison, but he was very thin, but happy to see me. He wanted to hug me. Though I knew he was my dad, he was a stranger to me. It has become an eternal regret that I never hugged him,” she said.

Even in school, children are not able to escape persecution over their faith or that of their families. Former Christian children in China, speaking about their experiences under the protection of pseudonyms, remember being taught in class that religion was prohibited, being bullied for their parents’ arrests, excluded from extracurricular activities in school, punished for attending church and religious activities outside of school, forced into reciting anti-religion and pro-atheism slogans, and coerced into signing documents renouncing their faith.

In September 2018, the Chinese department of education forced students to pass a test demonstrating their anti-religious knowledge in order to graduate. The administration at the Shangqui Institute of Technology threatened students with expulsion if they held religious beliefs.

Two schools asked more than 300 children to sign a form stating they did not follow a religion and “shamed” them for their faith in Zhejiang province, which is known for its Christian population.

That clearly contravenes international law, Emilie Kao, director of The Heritage Foundation’s DeVos Center for Religion and Civil Society, noted at a Jubilee Campaign event, “China Bans Faith for All Children,” on Oct. 5: “International law guarantees children the freedom to seek the truth and to live according to their consciences.”

The situation for Uighur children in schools is eerily similar and equally distressing. Muslim Uighur children have reported being prohibited from wearing religious clothing, such as headscarves; discouraged from participating in Ramadan; and punished by school administrations for attending worship and religious activities.

One government authority revealed to Radio Free Asia that, because religious practice among Uighurs is perceived as akin to extremism, Xinjiang-specific regulations are stringent and can even be used to criminally charge children for something as simple as reading the Quran or visiting a mosque. There have also been reports of Uighur children forcibly separated from parents and sent to so-called boarding schools.

For children of imprisoned Falun Gong practitioners, school is often a reminder of their status as outsiders in society.

Friends of Falun Gong reveal multiple stories of children who grew up during China’s crackdown on the group in 1999. One girl, Yisha, remembers being told by a classmate that her mother should be arrested for practicing Falun Gong.

Another girl, Vivian, was sleeping one night at her boarding school before she was abruptly woken up by classmates who hit her, told her she was insane for proudly practicing Falun Gong, and attempted to persuade her to commit suicide by jumping out her bedroom window.

Yet another girl, Danshan, recalled being tricked by a teacher into signing a Falun Gong renunciation-of-belief form. She said she was misled to believe it was a form for participation in a charity function.

In the so-called autonomous region of Tibet, municipal governments, under the control of the Chinese Communist Party, have essentially erased the religious and linguistic identity of Tibetan Buddhist children and adolescents by banning Buddhist curriculum and Tibetan language teaching in schools.

As with the Uighurs, Tibetan Buddhists are seen as extremist and separatist, and the Chinese Communist Party has started to target the culture at its very roots, in primary schools throughout the province.

In nearly every sphere of life, a Chinese child’s religious and spiritual background is hijacked by the Chinese Communist Party as a means for justifying persecution, family separation, indoctrination, and discrimination.

That in 2020 thousands of children in China must keep their faith a secret for fear of retribution is absolutely unacceptable and reprehensible, and attests to China’s flagrant lack of concern regarding children’s inalienable rights and freedoms.

The international community cannot let China’s violations of the fundamental freedoms of children, the right to seek the truth, to go unchecked.