Leftists Are Upset With the Ongoing Presidential Transition. Let’s Look Back at How They Behaved in 2016. 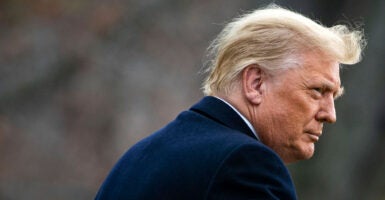 With so much pearl-clutching by the left and the media over delays and disruptions of the ongoing presidential transition, it helps to put things in perspective by reviewing how things went for President-elect Donald Trump during his transition period, starting from Election Day 2016 to his inauguration on Jan. 20, 2017.

Before and during Trump’s transition period, he and his campaign were under investigation by President Barack Obama’s FBI based on the baseless Russia election conspiracy.

Just two weeks before Trump’s inauguration, with Obama’s blessing, FBI Director Jim Comey met one-on-one with Trump in New York to inform him of the “salacious” details of the so-called Steele Dossier (a collection of fabricated nonsense financed by the Hillary Clinton campaign).

But the purpose of Comey’s briefing was not to inform or enlighten Trump, but rather to gather information on him for the ongoing sham investigation known as “Crossfire Hurricane.”

After Comey told Trump about the bogus dossier, he dashed off to a waiting FBI vehicle where he had arranged to have a classified laptop waiting for him. Comey typed up the memo about the Trump briefing while being driven to the FBI’s building in New York, where he scurried to a secure room to gab with the Crossfire Hurricane team waiting back at FBI headquarters in Washington.

Nothing says “smooth transition” like gaslighting the president-elect and reporting your impressions to FBI headquarters, right?

Incoming presidents traditionally are given leeway to pick their Cabinet officials. That’s supposed to be the norm—the president was elected by the people, and therefore should be allowed to select the top officials to run the executive branch.

After Obama’s election, Senate Republicans—then in the minority—voted for Obama’s Cabinet nominees in large numbers. Top nominees such as Hillary Clinton for secretary of state, Eric Holder for attorney general, and Peter Orszag for director of the Office of Management and Budget, were confirmed 94-2, 75-21, and by unanimous consent, respectively.

That tradition ended after Trump was elected. Trump’s nominees for secretary of state, Rex Tillerson; attorney general, Jeff Sessions; and director of the Office of Management and Budget, Mick Mulvaney, squeaked by their confirmation votes with 56-43, 52-47, and 51-49, respectively. A collective total of only five “yea” votes were cast by Democrats for those three nominees (three of the five votes coming from Sen. Joe Manchin, D-W.Va.).

But for the fact that Republicans controlled the Senate by a razor-thin majority, Trump would have begun his term without these crucial Cabinet officials.

Rather than give deference to the president’s Cabinet nominees, Senate Democrats joined the #Resistance from the get-go.

Trump has been criticized in the press for using the postelection months at the White House to cement his legacy—implementing regulations, appointing allies to advisory boards, auctioning off drilling rights in the Arctic National Wildlife Refuge, etc.

The Washington Post is unhappy with these actions, scribbling that “the whirlwind of activities has bucked tradition of past presidents who have deferred on major policy actions during the lame-duck period.”

The Post and other Democrats have a short memory. If they’d only read what The New York Times reported after the 2016 election it would be clear that Trump has plenty of precedent to rely upon.

With less than three weeks before the Obama White House is history … the president is using every power at his disposal to cement his legacy and establish his priorities as the law of the land. He has banned oil drilling off the Atlantic coast, established new environmental monuments, protected funding for Planned Parenthood clinics, ordered the transfer of detainees from Guantánamo Bay, criticized Israeli settlements and punished Russia for interfering in the recent elections through cyberattacks.

Those all sound like “major policy actions,” don’t they? If Trump is “bucking” the tradition of past presidents, as the Post alleges, it must be presidents from the past other than Obama.

Should Trump sit idly by instead of cementing his legacy? Should Senate Republicans give a Biden administration’s Cabinet nominees more deference than Democrats gave Trump’s nominees in 2017? Should John Durham (now a special counsel) end his probe into the origins of the FBI’s ridiculous Crossfire Hurricane investigation?

A case can be made that Trump and Senate Republicans should treat the Democrats’ past behavior as water under the bridge. Be the bigger political party, as it were. Perhaps that’s what’s best for the country.

Time will tell, but it’s unlikely that former Vice President Joe Biden will suffer the same shoddy treatment that Trump got during his presidential transition. However, Republicans can certainly make a good case that it’s the transition Biden would deserve.