3 Things to Know as 2020 Election Challenge Moves to Congress 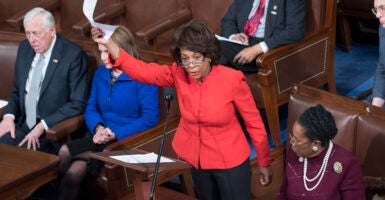 Rep. Maxine Waters, D-Calif., objects to the Electoral College count during a joint session of Congress to tally the electoral ballots for the president and vice president of the United States on Jan. 6, 2016. (Photo: Tom Williams/CQ Roll Call/Getty Images)

After their party’s presidential nominee lost in the Electoral College, some House members lined up to object to and challenge the results during the Jan. 6 joint session of Congress to count the electoral votes.

House Democrats made 11 objections. In each case, then-outgoing Vice President Joe Biden—presiding over the session in his role as Senate president—asked if the objection had a Senate sponsor.

Then-House Minority Leader Nancy Pelosi, D-Calif., said she didn’t encourage the objection, but would “support” the objections from her caucus. Rep. Maxine Waters, D-Calif., demanded a senator join the challenge against certifying the results.

With no senators backing the objections, members of Congress counted the votes, and Biden said, “It’s over,” gaveling the official end of the 2016 election with a victory, giving it to President Donald Trump.

Fast-forward nearly four years to Monday, and the Electoral College voted to make Biden president, an apparent victory over Trump in the 2020 election. However, a joint session of Congress still will have to certify the votes, in what will be the last long-shot challenge for the Trump campaign. Still, Trump hasn’t conceded the election.

Objections from House members—as happened in 2016—have become almost routine when Republican presidents were elected, as was the case with George W. Bush after the 2000 and 2004 elections. But in 2021, the tables will turn, and there likely will be some other differences beyond just party affiliation.

1. What Could Be Different This Time?

It appears likely that Brooks will have at least two Senate sponsors, as required by law for the objection to be debated.

Republican Sens. Ron Johnson of Wisconsin and Rand Paul of Kentucky indicated they were open to sponsoring the challenges.

By the time Congress votes on the certification, the number of House and Senate Republicans ready to challenge the Electoral College count could expand. More than 100 House Republicans joined the Texas lawsuit against Pennsylvania, Michigan, Wisconsin, and Georgia, which the Supreme Court declined to hear on Friday.

Brooks tweeted: “No question it’s an uphill climb to do what is necessary to protect the sanctity of America’s election system. But we never know who will win these political fights until we fight them. I’m going to fight!”

Notably, 2016 didn’t set any new precedents. Past disputes were brought during the counting. What will be different this year is the loser of the Electoral College vote hasn’t conceded the election.

The 2020 postelection is frequently compared with the 2000 election dispute.

Then-Vice President Al Gore, a Democrat, conceded the 2000 election to Bush after the Supreme Court ruled against his campaign’s efforts to win Florida. The Electoral College voted for Bush.

However, more than a dozen House Democrats made 20 separate objections during the joint session on Jan. 6, 2001. Gore, as vice president, presided over the session, each time asking for a Senate sponsor and each time receiving none. He gaveled out the session and certified Bush as the winner.

Now that the electors have voted to give Biden 306 electoral votes to Trump’s 232 votes, the states have until Dec. 23 to submit their electors’ votes to Congress. Congress is scheduled to convene to count the votes in a joint session Jan. 6.

As Biden did four years ago, Vice President Mike Pence, in his role as Senate president, in January will preside over the counting.

The objections procedure is based on a law passed in 1887. An objection must be declared in writing by a House member and signed by at least one senator for any particular state as an attempt to prevent certification. As was the case in past years, an objection requires sponsorship from both chambers.

If an objection is filed with support from at least one member from each chamber, then the proceedings would stop and both the House and the Senate would be required to debate the objection for two hours. A Republican-controlled Senate and a Democrat-controlled House would have to agree on disregarding a state.

While this seems highly unlikely now, it does potentially buy time for the Trump campaign legal team to produce more evidence of alleged election fraud, whether that’s actual voter fraud or whether a jurisdiction obeyed the law regarding election administration. The Trump campaign has made challenges on both fronts.

If the House and Senate agree to toss out enough electoral votes to reduce Biden’s tally below the 270-vote threshold needed to win, the presidential election could then potentially be thrown to the House of Representatives for the first time since 1824.

However, presuming the current Electoral College vote holds, Pence would play a role similar to that of then-Vice Presidents Dan Quayle in 1993 and Walter Mondale in 1981, by certifying the defeat of his own ticket. Pence would declare the winner of the election after the counting concludes.

3. Have Senators Ever Signed on Before?

Although objection from House members is routine, Senate sponsorship is not. Since the law was passed in 1887, only twice has a senator joined a House member, according to the Congressional Research Service.

In 1969, then-Rep. James O’Hara, D-Mich., and then-Sen. Edmund S. Muskie, D-Maine, who had been Humphrey’s vice presidential running mate, objected in writing to counting the vote of an elector from North Carolina, who had voted for Wallace even though Nixon had won the state.

When the joint session resumed, the challenged electoral vote was counted for Wallace, who won a total of 46 electoral votes after carrying five states.

During a joint session of Congress that year, then-Rep. Stephanie Tubbs Jones, D-Ohio, and then-Sen. Barbara Boxer, D-Calif., objected in writing to the Ohio electoral votes.