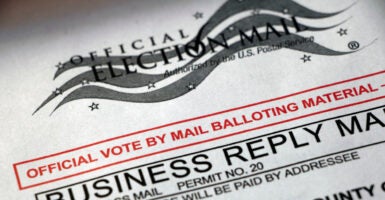 With the addition of the newest batch of cases, all from the state of Texas, The Heritage Foundation’s Election Fraud Database now has 1,302 cases of proven election fraud, and we are following numerous other ongoing prosecutions.

As these cases and the database demonstrate, the threats to election integrity and instances of election fraud throughout the country continue to jeopardize fair and free elections for the American people.

The Texas cases also demonstrate that fraud can happen at different points during the election process, and that it effectively dilutes legitimate ballots cast by legal voters.

During the 2014 general election, for example, Avery Ayers sought to run as an independent challenging Sen. John Cornyn, R-Texas. However, he forged the signatures of voters to qualify to be a candidate on the ballot. Ayers pleaded guilty to a third-degree felony fraud charge in state court and was sentenced to five years in prison.

Though he was paroled five months into his sentence on that charge, he’s now in federal prison for a separate wiretapping felony.

Threats to fair and free elections can occur at the registration process, as some fraudsters use invalid or commercial addresses to register to vote in areas where they don’t actually live.

In 2013, a group of at least four people attempted to take over a local utility board by falsely registering a Residence Inn as their home address.

James Jenkins, recently added to the database, pleaded no contest and was sentenced to 12 months of probation and a $2,000 fine for his involvement in this scheme. One co-conspirator was convicted by a jury and sentenced to three years in prison, and two other conspirators entered pretrial diversion programs to avoid prosecution.

Others, like Israel Garza, attempt to vote even though they are ineligible. When successful, such actions can negate the ballot of a legitimate voter, effectively disenfranchising that voter.

Garza, a convicted felon whose rights had not been restored, attempted to vote in a 2010 Texas municipal election even though he was ineligible. He pleaded guilty to attempted illegal voting and was sentenced to a year in prison, two years of probation, and fined $2,500.

Another convicted felon, Benito Aranda Jr., voted in the 2012 Texas primary election. He was convicted and sentenced to 10 years in prison for voting illegally as a convicted felon, but is serving the remainder of his sentence under “community supervision.” That’s the Texas term for probation.

The Heritage database is not an exhaustive, nor comprehensive list. It doesn’t capture all cases, and certainly doesn’t capture all reported instances or allegations of election fraud, some of which may be deserving of being investigated or prosecuted, but aren’t.

But the database does highlight vulnerabilities in the election system.

We do our best to track cases that are brought to our attention, but we don’t add them to our database until a conviction has been obtained or a civil judgment entered.

Take, for example, a prosecution we are currently tracking in Texas, involving a social worker who has been charged with 134 felony counts of election fraud.

Kelly Reagan Brunner worked in a state-supported institution for Texans with intellectual and developmental disabilities. She is alleged to have registered 67 of the residents to vote without their knowledge or consent, many of whom had been declared mentally incompetent under Texas law.

As Texas Attorney General Ken Paxton said, it “is particularly offensive when individuals purport to be champions for disability rights, when in reality they are abusing our most vulnerable citizens in order to gain access to their ballots and amplify their own political voice.”

Another prosecution we are tracking, this one out of Los Angeles, involves Carlos Antonio De Bourbon Montenegro, aka Mark Anthony Gonsalves, a prospective mayoral candidate. He was recently charged with numerous felony and misdemeanor offenses of election fraud for his alleged involvement in a scheme that is said to have involved submitting fraudulent voter registrations on behalf of homeless individuals.

Thankfully, this attempted fraud was caught before a ballot was cast due to the actions of a county registrar who flagged the suspicious behavior.

Other prosecutions we have recently started tracking involve other convicted felons illegally voting.

In Wisconsin, it’s alleged that at least four felons voted despite being on a special parole status that prohibited them from voting. These men had been convicted of violent felonies, including rape, burglary, and strangulation of a woman.

Can you imagine the anger of their victims, or the victims’ families, knowing that these criminals were casting ballots, taking part in the process that determines the laws that they intentionally violated?

As these cases demonstrate, election fraud often harms the most marginalized in communities, damaging the power the people have to freely choose their representatives.

Awareness of the current threats is the first step in securing fair and secure elections and should be a bipartisan priority in every state.

In the meantime, we will continue to bring attention to, and document, election fraud cases and convictions occurring throughout the country.