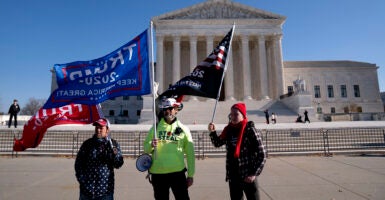 Supporters of the president gather Friday outside the Supreme Court, which later declined to hear a case seeking to overturn the election results in four states. (Photo: Stefani Reynolds/Getty Images)

In a dramatic blow to President Donald Trump’s attempts to challenge the unofficial election results, the Supreme Court on Friday evening rejected a Texas lawsuit seeking to overturn the outcome in four battleground states.

The high court’s one-page opinion said Texas did not have standing to sue over election procedures in Georgia, Michigan, Pennsylvania, and Wisconsin, four closely contested states that Trump won in 2016 but that his Democratic challenger, former Vice President Joe Biden, appeared to win five weeks ago.

The high court’s decision not to hear the case came only three days before the Electoral College is set to vote to determine a winner.

Justices Clarence Thomas and Samuel Alito made a nominal dissent in holding that any state has the standing to sue another state, but made clear that doesn’t mean they would rule in favor of Texas.

The Trump campaign had filed multiple lawsuits challenging the outcome in the four states as well as in Nevada and Arizona.

By Friday, 18 other states had joined Texas’ lawsuit through friend-of-the-court briefs filed at the Supreme Court. The Trump campaign also supported Texas, as did House Minority Leader Kevin McCarthy, R-Calif., and at least 120 other House Republicans.

In an unsigned opinion, the high court said:

The State of Texas’s motion for leave to file a bill of complaint is denied for lack of standing under Article III of the Constitution. Texas has not demonstrated a judicially cognizable interest in the manner in which another state conducts its elections. All other pending motions are dismissed as moot.

In my view, we do not have discretion to deny the filing of a bill of complaint in a case that falls within our original jurisdiction. See Arizona v. California, 589 U. S. ___ (Feb. 24, 2020) (Thomas, J., dissenting). I would therefore grant the motion to file the bill of complaint but would not grant other relief, and I express no view on any other issue.

Texas Attorney General Ken Paxton, a Republican, announced Tuesday that his state was seeking to take the four states to the Supreme Court. Each of the four went for Trump in 2016.

Earlier Friday, Trump had tweeted about the case.

Texas alleged that Georgia, Michigan, Pennsylvania, and Wisconsin violated the rights of Texas voters when they changed election rules without authorization by their respective state legislatures.

The suit argued that each of the four states violated the Electors Clause of the Constitution (Article II, Section 1, Clause 2), which Texas argued vests “state legislatures with plenary authority regarding the appointment of presidential electors.”

The lawsuit asked the Supreme Court for a declaratory judgment that Pennsylvania, Michigan, Georgia, and Wisconsin violated election law and thus their electoral votes—as they currently stand—should not be counted.