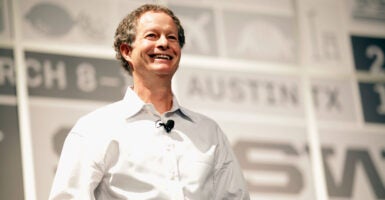 In a recent event hosted by the American Enterprise Institute, Whole Foods Market CEO John Mackey highlighted the many ways in which business elevates humanity.

Mackey specifically praised the innovation and value creation inherent in free market capitalism that have resulted in astonishing growth and real, measurable human progress from a world of near-universal poverty to unprecedented prosperity.

Mackey’s message—elaborated on in his new book “Conscious Leadership: Elevating Humanity Through Business”—is not new, however.

Despite the current global economic difficulties caused by the coronavirus pandemic, it’s undeniable that we live in a Golden Age of economic progress.

People today enjoy longer lives, significantly better health, and a level of living standards that would have been unthinkable just a few generations ago.

The real magic of free market capitalism has always been that countless individuals and private enterprises, by exercising the freedom to pursue their own goals and dreams, have made possible previously inconceivable heights of economic progress that benefit all of us.

Billions of people around the world have escaped poverty as a result.

Since 1995, that progress has been documented annually in The Heritage Foundation’s Index of Economic Freedom.

Referencing the index in a 2011 Wall Street Journal op-ed, Mackey offered a prescription that should still resonate today:

Business is not a zero-sum game struggling over a fixed pie. Instead, it grows and makes the total pie larger, creating value for all of its major stakeholders—customers, employees, suppliers, investors, and communities. …

The U.S. is still an extraordinary country by almost any measure. If we once again embrace the principles of individual and economic freedom that made us both prosperous and exceptional, we can help lead the world towards a better future for all.

We’ve told a bad narrative, and we’ve let the enemies of business and the enemies of capitalism put out a narrative about us that’s wrong. It’s inaccurate and doing tremendous damage to the minds of young people.

We have to counter that. … Otherwise, the socialists are going to take over. That’s how I see it, and that’s the path of poverty.

With the world wallowing in a recession and millions falling toward poverty because of coronavirus lockdowns and other restrictions, now is not the time to experiment with failed policies of collectivism and greater government control.

It’s just the opposite. Now is the time to preserve and enhance our economic freedom, which has to be more deeply rooted in the rule of law, limited government, and a functioning civil society.

In a free society, there’s no shortage of private sector organizations—churches, clubs, charities, and schools—ready to help those in need. There may be a role for governments, too, but it’s vital that governments resist the temptation to slow down economic progress through excessive regulations, taxes, and protectionist measures.

Policymakers in Washington and around the globe cannot simply spend their way back into prosperity after the toll public health responses have taken on local economies due to the current pandemic.

For a full recovery, it’s essential that economic freedom not be curtailed by expanded government emergency powers or new government programs legitimized by the false promises of socialism.

Economically free and dynamic societies can provide the effective response and resilience we need now in resurrecting our livelihoods. Restoring what we know has worked in the past and is what the world needs now.

As the Whole Foods Market CEO summed it up: “Capitalism is the greatest thing humanity’s ever done.”