Pro-Abortion Members of Congress Are Pushing for Taxpayer-Funded Abortion. Here’s What You Need to Know. 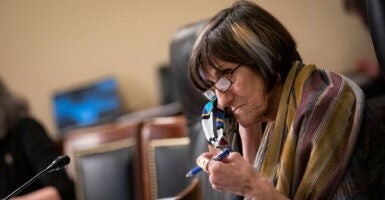 Rep. Rosa DeLauro, D-Conn., the incoming chairwoman of the House Appropriations Committee, has expressed her intent to disregard the Hyde Amendment, which prohibits taxpayer dollars from being spent on most abortions. (Photo: Al Drago-Pool/Getty Images

The attack came on Tuesday during a subcommittee hearing of the powerful Appropriations Committee for the House of Representatives, titled “The Impact on Women Seeking an Abortion but Are Denied Because of an Inability to Pay,” in which DeLauro, the incoming committee chair, expressed her intent to no longer incorporate the Hyde Amendment into annual appropriation bills.

One of the pro-life movement’s first victories following the Roe v. Wade and Doe v. Bolton decisions in 1973, which effectively legalized abortion on demand across the country, came about thanks to Rep. Henry Hyde, R-Ill., in 1976. He championed an amendment to the annual Labor, Health and Human Services, Education, and Related Agencies funding bill, which prohibited the department from expending taxpayer dollars for most abortions.

Since then, similar language has been included in annual appropriation bills for the U.S. Department of Health and Human Services and other departments, and was held constitutional by the Supreme Court in 1980.

This important guardrail has, for 44 years, ensured that taxpayer dollars do not pay for most abortions (the language includes an exception for rare instances of rape or incest, for example).

Under its first iteration, the amendment applied to the Medicaid health program. Since then, the similar language has been incorporated to apply funding restrictions in other services and programs, including Medicare, TRICARE, the Federal Employees Health Benefits Program, and the Children’s Health Insurance Program.

The Hyde Amendment has saved an estimated 2.4 million lives since 1976. These lives aren’t abstractions—they’re real people that we live and work alongside each day. They have gone on to have families and children of their own, faced trials and challenges, and achieved victories small and large in their homes and their communities.

These lives are more than a statistic. Each and every one of these 2.4 million individuals has immeasurable worth and dignity. The Hyde Amendment saved roughly 60,000 lives in 2019 alone, and about 30,000 through the first half of 2020.

If congressional Democrats have their way and the Hyde Amendment is no longer incorporated in annual appropriations bills—which DeLauro and House Speaker Nancy Pelosi have said will be the case—thousands of unborn boys and girls will pay the price.

The only thing standing between the Hyde Amendment and pro-abortion members of Congress might be the Senate. However, the exact makeup of the Senate remains an open question.

If pro-life policymakers hold the majority in the upper chamber, they will have an opportunity to reject calls to do away with the Hyde Amendment during spending negotiations, and they should do so unequivocally.

The Hyde Amendment is good policy as a matter of principle. It is also a popular policy, too. After all, 6 in 10 Americans oppose taxpayer funding for abortion, including 42% of independents and one-third of Democrats.

So why the calls to do away with a popular, consensus policy? Three words: the abortion lobby.

Radical and well-funded actors like Planned Parenthood, NARAL Pro-Choice America, and others have exerted increasing influence on the left in recent years. As a presidential candidate, Joe Biden even reversed his decades-long history of supporting the Hyde Amendment and abandoned his long-held position in light of the left’s new abortion orthodoxy.

Congressional policymakers must stand firm in the upcoming 117th Congress and reject all attempts to force American taxpayers to pay for elective abortions. And the pro-life movement should continue its good work supporting women facing unplanned pregnancies and difficult circumstances.

The Hyde Amendment is a life-saving policy. Rather than repeal it, Congress should make it permanent law by enacting the No Taxpayer Funding for Abortion Act. Millions of fellow Americans are with us today thanks to the amendment’s continued presence in federal funding bills.

Congress must reject attempts to change course, and the pro-life movement must continue its efforts to provide women, children, and families with the tools and resources—not abortion—that they need to flourish and thrive.