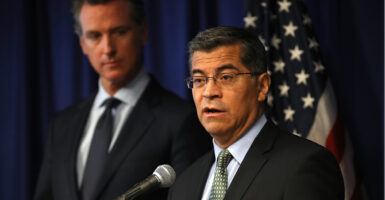 “Far from ‘uniting’ the country, Biden has proven yet again he is an extremist on abortion,” Susan B. Anthony List President Marjorie Dannenfelser said in a statement following Biden’s Monday announcement. “Becerra is aggressively pro-abortion and a foe of free speech.”

With his choice of California Attorney General Xavier Becerra for HHS Secretary, Joe Biden has proven yet again he is an extremist on abortion@marjoriesba (1/3)https://t.co/oUK2LkoRMJ

“Not only that, he went all the way to the Supreme Court to try to force California’s pro-life pregnancy centers to advertise and refer for abortion—a policy the Court rejected as unconstitutional,” Dannenfelser said. “In Congress, he even voted in favor of partial-birth abortion.”

Sen. Tom Cotton, R-Ark., tweeted that he will be voting “no” on Becerra’s appointment, and that Becerra should be “rejected by the Senate.”

“Xavier Becerra spent his career attacking pro-life Americans and tried to force crisis pregnancy centers to advertise abortions,” Cotton said. “He’s been a disaster in California and he is unqualified to lead HHS.”

He’s been a disaster in California and he is unqualified to lead HHS.

I’ll be voting no, and Becerra should be rejected by the Senate. https://t.co/mEvpMrqPeH

“Thankfully both of his efforts failed at the Supreme Court,” she said. “But Becerra is outright hostile to religious liberty and Biden’s choice of someone so openly anti-Catholic is an affront to the faith that he so frequently invoked as part of his campaign.”

ADF had to go all the way to the Supreme Court to stop Becerra from forcing religious pro-life pregnancy centers to advertise for abortions. He is an extremist who has no regard for conscience or protecting life. There’s nothing moderate about this pick. Nothing. https://t.co/4dD3npBO5v

Becerra and the Biden campaign did not immediately respond to a request for comment from The Daily Caller News Foundation.