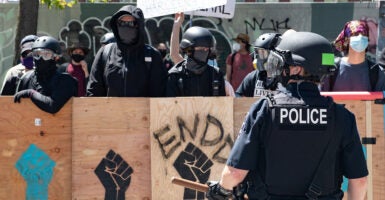 A police officer stands in front of counterprotesters during a rally to stop defunding of the Seattle Police Department Aug. 9, 2020, at Seattle City Hall. (Photo: Noah Riffe/Anadolu Agency via Getty Images)

Democratic Seattle Mayor Jenny Durkan is set to sign a bill that would slash police funding amid a citywide crime spike.

Durkan’s signature would cut police training and overtime funds by 18% after the City Council voted overwhelmingly in favor of the budget reductions, according to Fox News.

Activists within local government unsuccessfully sought a 50% slash in law enforcement funding, but the council did approve the transfer of 911 dispatchers, parking officers, and mental health workers out of the Seattle Police Department, Fox reported.

The new budget would inject around $100 million in projects for communities of color and allow for the hiring of 100 new officers, according to Fox.

The mayor’s move would come amid a crime surge in the city where both murders and burglaries are on the rise. The city has reported a total of 41 homicides so far in 2020 compared to 28 in 2019, Seattle Police Department crime statistics showed.

Similarly, law enforcement recorded 8,418 burglaries so far this year with 7,634 reported in 2019, the data revealed. Arson and motor vehicle theft are also on the rise, while rape, robbery, and aggravated assault have yet to top 2019’s totals, according to the statistics.

“I believe we are laying the groundwork to make systemic and lasting changes to policing,” Durkan said in a statement last week, according to Fox. “We have rightly put forward a plan that seeks to ensure SPD has enough officers to meet 911 response and investigative needs throughout the city, while acknowledging and addressing the disproportionate impacts policing has had on communities of color, particularly black communities.”

Calls to reduce police funding followed the death of George Floyd, who died after a Minneapolis cop knelt on his neck for over eight minutes, video showed. Seattle quickly became an epicenter of unrest when dissidents formed the Capitol Hill Organized Protest and occupied a district near law enforcement headquarters.

Two people died, one of whom was 16 years old, and four were wounded in multiple shootings within the zone before officers dismantled the encampment, according to The Seattle Times.