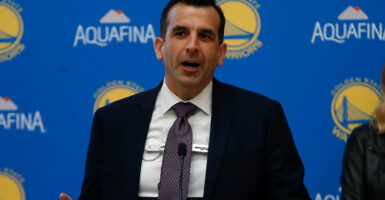 The mayor of San Jose, California, attended a Thanksgiving party with family members who were not part of his own household after telling citizens to “cancel big gatherings this year.”

“Cases are spiking, in part because we’re letting our guard (and masks) down with family & friends,” San Jose Mayor Sam Liccardo tweeted Nov. 25. “Let’s cancel the big gatherings this year and focus on keeping each other safe.”

The following day, Liccardo celebrated Thanksgiving with an unknown number of guests at the Saratoga home of his elderly parents, NBC Bay Area reported.

Liccardo’s staff confirmed that the mayor attended the Thanksgiving event but refused to specify how many people and different households were present as well as whether attendees wore masks when they were not eating, the publication reported.

“This is a private event—not public,” Jim Reed, Liccardo’s chief of staff, repeatedly told NBC Bay Area. “We are going to redraw the line between what is personal and what is public because that line has become blurred.”

The mayor’s staff initially told NBC Bay Area that Liccardo would be “staying home” on Thanksgiving, then contacted the publication the day after Thanksgiving to say that a spokesperson had “misspoke” and that Liccardo went to his parents’ house for the holiday.

Cases are spiking, in part because we’re letting our guard (and masks) down with family & friends. Let’s cancel the big gatherings this year and focus on keeping each other safe https://t.co/oHFXb6DZ82

Liccardo did not immediately respond to a request for comment from The Daily Caller News Foundation.

News that Liccardo attended the “private event” came the same day that FOX 11 reported that Los Angeles County Supervisor Sheila Kuehl was seen dining outside at a Santa Monica restaurant last week, shortly after she voted to ban outdoor dining.

“She loves Il Forno, has been saddened to see it, like so many restaurants, suffer from a decline in revenue,” the spokesperson told FOX 11. “She ate there, taking appropriate precautions, and sadly will not dine there again until our Public Health Orders permit.”