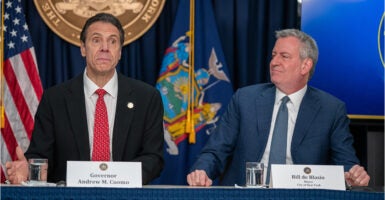 Owners of a Staten Island pub have declared it an “autonomous zone” in defiance of tighter COVID-19 restrictions in New York City from Mayor Bill de Blasio and Gov. Andrew Cuomo.

Keith McAlarney says he and business partner Danny Presti decided to follow in Seattle’s footsteps and designate their restaurant, Mac’s Public House, to be independent from New York City when new government mandates required them to end all indoor dining.

He said the government’s new restrictions left him “no other choice” than to take a stand to keep the doors open at Mac’s Public House.

Mac’s Public House is located in what de Blasio calls an “orange zone” due to the area’s high number of coronavirus cases. Within orange zones, restaurants are allowed to offer only outdoor dining, takeout, and delivery.

McAlarney posted signs on the windows declaring the establishment exempt from the new COVID-19 restrictions:

!ATTENTION! As of November 20, 2020 we hereby declare this establishment an !!!AUTONOMOUS ZONE!!! We refuse to abide by any rules and regulations put forth by the Mayor of NYC and Governor of NY State.

The restaurant owners’ aim is to “tell the governor and to tell the mayor that you need to work with us,” McAlarney said in an interview with Carlson. “But you did not want to work with us, and we were forced into this situation that I don’t know what else I can do.”

The restaurant owner said officials should have consulted with business owners before imposing new coronavirus restrictions and added that he is “so behind on bills” after months of such limits on operations.

McAlarney and Presti say they abided by all restrictions when New York City took measures in March to slow the spread of the virus.

But now, Presti told “Fox & Friends” on Monday, the restaurant owners and employees understand the virus and how to take appropriate precautions to keep themselves and patrons safe.

“Our kind of motto right now is business as usual, because we feel as though we understand the virus is happening and it’s a real thing, but we do know how to operate our business in a safe manner and we just can’t close again,” Presti said on “Fox & Friends.”

It didn’t take long for de Blasio to learn about the newly “autonomous” Mac’s Public House and send out law enforcement to issue thousands of dollars in fines, which Presti says he doesn’t plan to pay.

New York state’s Health Department issued a shut-down order to the restaurant and the state ordered suspension of its liquor license, the New York Post reported.

The restaurant owners have no plans to close their doors, but Presti said on “Fox & Friends” that the future is “very scary still.”