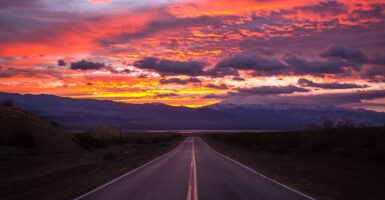 Poverty and suffering are never ideal, but the choice to thrive still lies in the hands of those who suffer. (Photo: Amanda Richter/Getty Images)

Tanner Aliff is a Portland-based Young Voices contributor and a research fellow studying the effects of the COVID-19 pandemic.

It’s hard to believe that the American dream is still possible when you’re sleeping in a hoodless Pontiac Sunfire with nowhere else to go. I should know—that’s exactly where I found myself at the end of my freshman year at college.

Having put all I had toward tuition, I had nothing else. No home, no money, and no assets aside from the car and a summer roofing job. It seems contradictory, but looking back now, I can see it was during those cold nights that I was gaining the experience that would launch my career.

My issues then could be considered trivial compared to the hardships of many Americans who are worse off. I had the car, after all, and I had two divorced parents who remarried to great people. I was fairly insulated from violence in my neighborhoods, and had the aptitude to be accepted into college.

Despite these advantages, I seemed to always ask that ineluctable, two-pronged question that’s bothered so many Americans: “Can I actually climb the socioeconomic ladder based on the merit of my work, and is it fair that some people will be placed above me when they haven’t gone through what I have?”

I once heard a lecture by Arthur Milikh, then a researcher at The Heritage Foundation, in which he argued that self-reliance is a pillar of prosperity, and that every American can use it to achieve economic mobility. At the time, that seemed so contrary to my personal experience that it almost made me laugh out loud.

My own journey trying to climb the socioeconomic ladder was so different from the experiences of an affluent friend of mine—let’s call him Ian—that it seemed to me that self-reliance had little to do with prosperity.

For Ian, misfortune meant having to wait an extra day for his $395 Versace sandals to be delivered, being annoyed when he maxed out one of his credit cards, being frustrated when his Apple Watch misquoted his voice, and being upset when his father refused to cover his weekly $50 Jamba juice expenses.

Did Milikh mean to suggest that Ian’s inconveniences were comparable to mine?

I had to live in an apartment with drug dealers for neighbors. I had to cut living costs by sneaking into school events to take leftover food. I was paying a monthly tuition bill of $2,452 while making only $1,500 a month, and feeling ashamed when I had to skip social events just to work night shifts at my second job.

And all the while, I was trying to navigate my feelings over my uncle, who died by police-assisted suicide, and trying to find peace over the arrest of my sister, with whom I’d just been reunited after a 13-year estrangement.

But what really almost made me scoff was that Ian, with his philosophy degree, was hired to work at his father’s hospital as a concierge medical appointment driver starting at $1,400 a week while I was offered two internships that combined could pay me only $600 a week.

I’ve been praised many times for overcoming adversity. Some have even called me a great example of an American who is putting in the work to pull himself out of trailer-park neighborhoods and a life lived from paycheck to paycheck. But that didn’t prevent me from getting angry at people like Ian, who seemed to gain prosperity so easily, or even at Arthur Milikh, whose faith in “self-reliance” seemed tone deaf to me.

Back then I thought my anger was justified. Looking back, I now see that my anger came from a pervasive insecurity about having less than someone who I thought didn’t lift a finger.

In a meeting before my graduation, one of my professors told me something I’ll never forget: He said my anger over inequality was understandable, but that it blinded me from recognizing a type of capital only people with my experience can obtain.

“Your experience is not at all desirable,” he said bluntly, “but make no mistake, through your tribulations you have elevated yourself to a position that no amount of money can purchase. Your struggles have ensured that your story encapsulates the human spirit, and it will always make you appear more human in the interview room.”

After graduation, his words rang true. I ended up getting accepted into the prestigious John Jay Institute, which gave me a direct avenue to work as a research fellow and writer in Washington, D.C. Even with other applicants having a higher educational and socioeconomic pedigree, I was later told that it was my desire to use my personal story to improve my livelihood that got me in.

Thanks to my newfound career, I have been empowered to focus on improving federal safety net programs to better help people become independent again. Not too shabby for a kid coming from the trailer parks of Spanaway, Washington.

As much as I wanted to scoff at Milikh, I now see that I couldn’t. He was right. Despite how unfair life seemed to me at the time, the reality of his words were staring me in the face: Opportunity has to be pursued.

For many, poverty is a black hole that can completely consume aspiration, but there are still some who can use their story to transform their lives and the lives of others. The world needs more people who share their stories to inspire others to flourish, and fewer people ruminating in anguish.

Poverty and suffering are never ideal, but the choice to thrive still lies in the hands of those who suffer.

When my father used to tell me to pull myself up by my bootstraps, I would respond satirically that I’d lost mine and that no one made them anymore. But I never really lost my bootstraps, I just had to realize what they looked like: My unique wealth was my story—the one I controlled and could leverage to harness self-reliance.