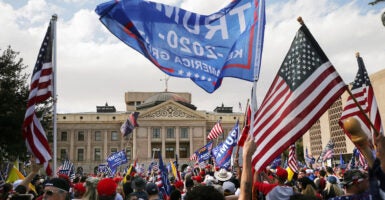 Supporters of President Donald Trump demonstrate at a "Stop the Steal" rally in front of the Arizona state Capitol in Phoenix on Nov. 7. On Monday, the Trump legal team presented its case to members of the Arizona state Legislature during a public forum. (Photo: Mario Tama/Getty Images)

On the same day that Arizona certified former Vice President Joe Biden as the winner of the state’s 11 electoral votes, state lawmakers held a fact-finding meeting Monday on allegations of voter fraud that might have tilted the closely contested state.

Biden appears to have won the traditionally Republican-leaning state by just over 10,000 votes. However, witnesses told state lawmakers that mail-in voting fraud and problems with the Dominion Voting Systems machines could have skewed the results.

According to a Joint Statement by the federal government agency that oversees U.S. election security, the Department of Homeland Security’s Cybersecurity & Infrastructure Security Agency: “There is no evidence that any voting system deleted or lost votes, changed votes, or was in any way compromised.”  The government & private sector councils that support this mission called the 2020 election “the most secure in American history.”

The event was not a formal legislative hearing, since the Legislature is out of session, but Republican members of both the state Senate and the state House of Representatives participated in the panel, asking questions of witnesses.

The event, which began in late morning and ran well into the evening, wasn’t held at the state Capitol, but rather off-site at a Hyatt Regency hotel in Phoenix, with a “Stop the Steal” rally of supporters of President Donald Trump going on outside.

“The purpose of this public hearing, an inquiry into the integrity of the election that just passed, is to provide a forum where no others have been permitted for the president’s litigation team to present the evidence and testimony,” said Arizona state Rep. Mark Finchem, a Republican, who organized the hearing, adding:

We are caught between the desire to trust the process and the suspicion that it has failed the people of Arizona, and potentially the people of our sister states. If there is voter disenfranchisement, we must identify its source and eradicate it, as we would any disease.

The following are four highlights from the Arizona legislators’ hearing.

If the allegations are true, the biggest news to come out of the forum was the possible addition of 35,000 illegal Democratic votes.

Retired Army Col. Phil Waldron, a cybersecurity expert, testified that an anonymous email from a Pima County tech provider alleged that 35,000 votes were illegitimately given to Democratic candidates in that county.

“He wanted to remain anonymous, but had enough concern that he wanted to send this to the Criminal Division of the U.S. Department of Justice,” Waldron said. “He did not want to be included in the investigation, but the information they recorded is what we would like the opportunity to investigate on your behalf or a forensics team of your choosing. It doesn’t matter to us.”

If the allegation of illicit votes is true, the 35,000 votes would be more than three times enough votes to flip Arizona to Trump. However, the anonymous individual is apparently thus far unwilling to provide a name or sign an affidavit under penalty of perjury.

“So, this coincides with the data analytics at that spike. We weren’t aware of this email until after the fact. So, there were approximately 35,000 fraud votes added to each Democratic candidate’s vote totals,” Waldron told the lawmakers.

He read from the message that said, “The candidates impacted include county, state, and federal election candidates,” and talked about the alleged 35,000 votes added for Democrats.

The anonymous person also alleged Democratic Party members invited him or her to a meeting on Sept. 10 and outlined a plan to add those votes.

The message from the anonymous person, displayed on a screen, said:

It was also stated that total voter turnout versus total registered voters determine how many votes we can embed.

Maricopa [County]  embed totals would be substantially higher than Pima’s due to embeds being based upon the total number of registered voters.

When I asked if this has been tested and how do we know it works, the answer was yes, and has shown success in Arizona judicial-retention elections since 2014, even undetectable in post-audits because no candidate will spend the kind of funds needed to audit and contact voters to verify votes in the full potential of total registered voters, which is more than 500,000 registered voters.

Still, Waldron said he would prefer the person identify himself on the record and under oath.

“We hoped this individual would come forward and issue this as an affidavit, but this is significant, and we also noted that the reporting numbers from Pima and Maricopa counties merged Election Day votes with write-in votes, with absentee ballots,” Waldron said. “So, there is no way in the publicly available data to parse those votes into the segments.”

Top state officials, including Arizona’s Republican governor, Doug Ducey, announced the certification of Biden as the winner of the state’s 11 electoral votes.

The governor tweeted, “Today, we signed the canvass for the 2020 election in Arizona. I’m grateful to the voters, the county election offices, the county recorders’ offices, & the poll workers across the state for their dedication to the success of our election system.”

Arizona House Democrats mocked the hearing in a tweet as a “meaningless waste of time at a downtown Phoenix hotel” and called for state residents to focus on the certification of a Biden victory and other election results.

However, during the hearing, former New York Mayor Rudy Giuliani, Trump’s personal lawyer, spoke out against efforts to certify the election with so many unanswered questions. A former federal prosecutor, he even suggested it might be illegal to certify the vote.

“The vote as it presently exists is false. It’s fraudulent. If they certify it, they are certifying a false statement to the United States of America. Gosh, when I was a prosecutor, that was a federal crime,” Giuliani said.

It’s clear that you are using machines that have been shown to be totally manipulated in other places, and you won’t give us the opportunity to examine those machines. I think anybody who puts their name on that is getting very close to committing a crime.

Moreover, Giuliani stressed to the Arizona legislators that what the governor and secretary of state say might be irrelevant.

He said in 1892, the U.S. Supreme Court clarified that Article 2, Section 1 of the United States Constitution gives state legislatures the sole authority to select their representatives to the Electoral College as a means of providing a safeguard against voter fraud and election manipulation.

“It’s your constitutional power solely. That clause doesn’t say governors. It doesn’t say Congress. It doesn’t say newspapers. It says state legislatures,” Giuliani said. “The Supreme Court has said you can change that and take that power back anytime you want to, because it’s your power. It’s not theirs. Whatever power the governor or the secretary of state thinks they are exercising isn’t theirs; it’s the legislature’s. You can take it back.”

At that, those in attendance at the forum began to cheer.

“Based on evidence, you can make a determination. What is the right count? How can we get as close to the right count as possible? If we can, then have the courage to select that person to get the electors, because that person won the honest vote,” Giuliani said.

He told the assembled state legislators not to fear the media’s wrath and that if they determined the real, accurate vote, history would view them as heroes.

That also prompted applause from the audience.

Jenna Ellis, another of the president’s personal attorneys, stressed they weren’t asking lawmakers to reverse the election, but to investigate fraud and determine if the results are legitimate before appointing electors for Biden.

“We are going to ask you, as legislators, to reclaim that authority and to make sure that the people of Arizona and indeed the people of the United States of America as a whole are not disenfranchised by corruption,” Ellis told the panel.

She quoted Founding Father Alexander Hamilton in Federalist 68 noting that state legislatures are the safeguard against corruption.

The Trump legal team also presented information from the Voter Integrity Fund, playing audio of several calls to people recorded as having requested an absentee ballot. Each said they did not do so.

Another witness for the Trump team was Shiva Ayyadurai, a former Senate candidate from Massachusetts and entrepreneur and engineer offering expert testimony on technology and data.

He presented data asserting the only way for Biden to have statistically caught up with Trump after trailing him early on was if the registered Democratic votes were 130% in favor of Biden and negative 30% for Trump. He showed a chart on a screen to explain the findings.

“What’s extraordinary about this graph is, again, we went through many, many iterations, it matches perfectly, near perfectly,” Ayyadurai told the Arizona state legislators. “The slopes match, the curves match. The shapes match. So, what this tells us is that this demographic distribution of allocation of party affiliations is what can generate this.

“I find it highly implausible, because this means that Mr. Biden got 130% of Democrat voters, and Mr. Trump got negative 30%.”

Anna Orth, a Pima County resident and Republican election worker, testified to the committee that she was denied the chance to observe about 2,000 duplicate ballots. Duplicate ballots are usually ballots that are somehow unclearly marked and require further inspection, typically by observers from both parties.

“I was specifically taken out of that room, ushered out, and brought into [another] room,” Orth told the state lawmakers.