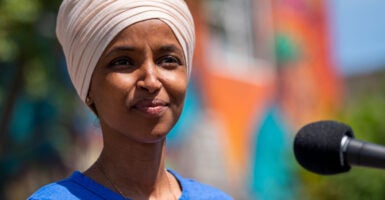 Will Americans still be celebrating Thanksgiving 100 years from now?

This year marks the 400th anniversary of the Pilgrims’ arrival in America. The moment, which deserved wider recognition, was celebrated in an excellent speech by Sen. Tom Cotton, R-Ark.

“A great American anniversary is upon us,” Cotton said on Nov. 18. “Regrettably, we haven’t heard much about this anniversary of the Mayflower; I suppose the Pilgrims have fallen out of favor in fashionable circles these days. I’d therefore like to take a few minutes to reflect on the Pilgrim story and its living legacy for our nation.”

Cotton delivered a fitting tribute to the Pilgrims and their story of faith and perseverance, which is so intertwined with the Thanksgiving holiday and the values we cherish most.

Perhaps predictably, the speech was attacked by media outlets and Rep. Ilhan Omar, D-Minn., who hurled an ad hominem attack at Cotton on Twitter.

Of course, it was The New York Times editorial board that was so “terrified” of Cotton’s opinions that it slapped an apology on an editorial he wrote for it about riots and fired the editor responsible for publishing it to appease woke staffers.

Omar’s comment, as utterly unserious as it was, demonstrates the great crisis confronting modern Americans.

She is not alone in dismissing the Pilgrim story or Thanksgiving as a whole. Many of our elite institutions—and now, elected officials—have a knee-jerk reaction to attack or dismiss much of our history.

Clearly, a steady drumbeat of woke ideologues in the media and on Twitter have convinced enough people to view the Pilgrim story as another example of oppressor against oppressed, of racist versus antiracist.

It’s unclear what “actual history” Omar was referring to, but perhaps something akin to it is Howard Zinn’s “A People’s History of the United States,” a work often celebrated by her left-wing allies. In this book, Zinn created a dishonest, distorted, and ultimately shallow picture of the Pilgrim arrival in America.

As Mary Grabar, author of “Debunking Howard Zinn,” wrote for The Federalist in 2019, Zinn deconstructs the Pilgrims’ “first” Thanksgiving to advance his Marxist ideas of oppressors versus oppressed.

In these simplistic narratives, the Pilgrims are portrayed as wicked oppressors and the native people as angelic, oppressed victims. This is the narrative now being peddled in elementary schools around the country.

It makes a cartoonish presentation of myriad people groups from the Bahamas and South America to New Mexico and New England. They are falsely oversimplified as universally peace-loving, Mother Earth-respecting, generous, and welcoming. All Indian tribes are lumped together as a mass of childlike people oppressed by the greedy capitalist explorers and settlers.

It’s no surprise that in 2020, Portland became an epicenter of Jacobin-like rioters, who targeted statues of George Washington and countless others while making absurd demands to abolish the police.

Here we see the fruits of a generation raised on Zinn.

While it is likely pointless to convince the vandals who attack statues and businesses that their views are misguided, we need to take the propaganda that has undermined our country and driven fellow citizens to lunacy and extremism seriously.

Thanksgiving is in the beginning stages of receiving the Columbus Day treatment. We can’t underestimate the threat of a few militant voices amplified by America’s elite culture-shaping institutions.

Columbus was once nearly universally admired in America, his holiday only questioned by an odd collection of left-wing radicals and, at an even early date, white nationalists who resented the celebration of a Catholic and Italian-born hero.

Now, the holiday has nearly collapsed. Even his statues are going undefended by the descendants of Italian immigrants who helped construct them.

Columbus may receive a revival someday, and I firmly believe the spirit of his holiday will. But for now, the radicals have mostly won.

Thanksgiving is much harder to cancel at the moment, but it is clear that leftists want it on the chopping block.

As I wrote in my book “The War on History: The Conspiracy to Rewrite America’s Past,” the real target here isn’t really the Pilgrims and Puritans, it’s the very heart of the Thanksgiving holiday, a holiday that—from its more modern origin in the 19th century—stands for faith, family, and patriotism.

All of these virtues are anathema to woke social justice warriors, who want to purge religion from the public square, obliterate the “Western-prescribed” traditional nuclear family, and redefine love of country as a mask for hatred of others.

[T]he Thanksgiving season is upon us and once again we have much to give thanks for. But this year we ought to be especially thankful for our ancestors, the Pilgrims, on their four hundredth anniversary. Their faith, their bravery, their wisdom places them in the American pantheon.  Alongside the Patriots of 1776, the Pilgrims of 1620 deserve the honor of American founders.

As Cotton noted in his speech, prominent Americans of ages past have made speeches marking the centuries since the landing at Plymouth. Perhaps the most famous is by New England statesman Daniel Webster, whose Plymouth Oration of 1820—delivered on “Forefathers Day”—was one of the most important steps in turning the New England story into a national story.

Webster’s speech was both deeply conservative and “progressive” at the same time. He explained how the Pilgrim forefathers laid down the foundation, the building blocks of what would become a country attached to both self-government and religious liberty.

The Pilgrim experience of fleeing religious repression and inaugurating their newly founded community in the New World with a simple, 200-word Mayflower Compact affirming the rule of law set in motion the inertia for a people rooted in but diverging from their European origins.

However, Webster’s speech was not merely a celebration of the past. He called on his generation and the generations to come to perpetuate and extend what we had been given: the great gift of free government.

The speech was mixed with a general, genuine, and unquestionable love of country, with a specific demand for what needed to be changed—the abominable institution of slavery in particular.

It is perhaps a symbol of Webster’s triumph that it is a senator from Arkansas, a Southerner and not a New Englander, who delivered a great oration in celebration of the Pilgrims for the fourth-century mark in a republic where slavery has long been buried.

In his own words, Cotton proudly declared:

Some—too many—may have lost the civilizational self-confidence needed to celebrate the Pilgrims … But I for one still have the pride and confidence of our forebears, so here today, I speak in the spirit of that cabin and I reaffirm that old Compact.

The future of our country, and the continuity of ideas and institutions that we should all be deeply grateful for, depend on Thanksgiving.

If we fail to cherish the special achievements of 1620, Americans a century from now will look forward through the lens of grievance and back with a feeling of contempt.

This war cannot be lost, or our country is lost.