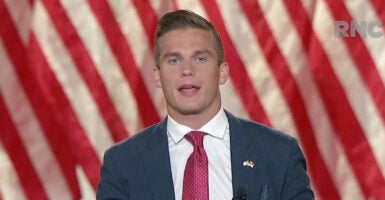 Madison Cawthorn, pictured speaking at the Republican National Convention on Aug. 26, a Republican who soon will become the youngest member of Congress in U.S. history, reportedly "has admitted he tried to convert Jews and Muslims to Christianity." So what? (Photo courtesy of the Committee on Arrangements for the 2020 Republican National Committee via Getty Images)

The investigative journalists over at The Daily Beast report that Madison Cawthorn, the North Carolina Republican who will soon become the youngest member of Congress in American history, “has admitted he tried to convert Jews and Muslims to Christianity.”

As a Jew, I’ve had several Christian friends try to turn me toward Jesus—Lutherans, Catholics, and evangelicals. Though denominations seem to adopt different philosophies on how best to proselytize in a secular world, they have all been exceptionally polite about it.

I assume that they wouldn’t be very good Christians if they weren’t spreading the Gospel of Jesus Christ. It is, from what I gather, one of the central premises of the enterprise. To be honest, I’m often surprised at how shy Christians are at this task.

As a heathen, though, I am flattered by the attention. And as a person in possession of free will, I am also unconcerned. Never once have I found such efforts to be “anti-Semitic.”

The very universality of the endeavor tells me it is not. I simply assume that my friends are troubled that I have forsaken salvation. Maybe they’re right. I’ll find out soon enough.

Fortunately, I do not live in the Holy Roman Empire or medieval Portugal or a shtetl in the Pale. The notion that Jews should be offended by Christians approaching us with theological ideas is un-American. Trust me, Jews are not helpless in the face of arguments.

And Christians do not have the power to compel us to believe. Unlike progressives—who try to force nuns to fund abortions or evangelicals to participate in same-sex weddings—no Christian has ever endeavored to coerce me to perform any of their rites.

Cawthorn, I assume, does not possess any special power, either.

In an interview with Jewish Insider, the newly elected congressman claims to have converted “several Muslims to Christ.”

When asked if he had ever tried to convert Jews, he answered: “I have. I have, unsuccessfully. I have switched a lot of, uh, you know, I guess, culturally Jewish people. But being a practicing Jew, like, people who are religious about it, they are very difficult. I’ve had a hard time connecting with them in that way.”

Indeed, religious Jews are notoriously difficult to convert, since the entire notion of a Second Coming is incompatible with their beliefs. Jews have spent a few thousand years stubbornly resisting this sort of pressure. Proselytism is somewhat of a foreign concept to Orthodox Jews, as they are commanded to push away newcomers.

But all the feigned anger directed at Cawthorn is, as is usually the case when the topic arises, about smearing evangelical Christians—and little do with anti-Semitism. I know this because many of the very people who pretend to be insulted for Jewish people are constantly excusing genuine anti-Semitism.

“In all seriousness, this is a really anti-Semitic thing to say. It’s like the original anti-Semitic thing to say and doesn’t rely on any codes or tropes,” says the theatrical Chris Hayes. “And the entire GOP should condemn it. But of course, they won’t, and I’m willing to bet it gets one-twentieth of the coverage of Omar’s tweet. And this speaks to something pretty profound about how the two parties are viewed and whose ‘extremism’ gets attention.”

Anyone with a rudimentary understanding of Christianity knows that it is not “extreme” to spread the Gospel. One can’t say the same for those who single out Jews as being bestowed with the uniquely “evil” ability to hypnotize the world or to buy off Christians with their “Benjamins.”

Apologists for Rep. Ilhan Omar, for Hamas, for the Holocaust-denying Iranian terror regime that targets Jews around the world whether they are Israelis or not—those who dishonestly single out the Jewish state as a cancerous presence on the world while ignoring others—are, at best, functionally anti-Semitic. “Anti-Zionism,” not belief in the Trinity, is the predominant justification for violence against Jews around the world.

Yes, I understand that many evangelicals support Israel, in part, because they believe it is necessary for the fulfillment of end-times prophecy. Since I do not share their theology, I am completely unbothered by this position. Indeed, I strongly prefer their support to the antagonism of progressives who want to see Israel destroyed for far more nefarious reasons.

Those about to fire off emails with refresher courses on the history of European Jewry, please save your efforts. For more than a century now, attacks on Jews have predominantly emanated from secular fascists and leftists, Arab nationalists, and Islamists—not Christians spreading the good word.

It is in secular France, where gruesome murders of Jews are now an annual event, that men can’t wear yarmulkes in public. And, rest assured, it is not because of Mormon missionaries. An American Jew is far more likely to encounter anti-Semitism on progressive campuses than anywhere else in this country.

If an evangelical Christian approaches you while saying, “God is good!” the only thing you are likely to lose is your time.