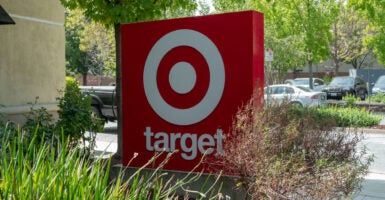 It’s no wonder our children are confused about their gender, since even the dictionary can’t define it. In an announcement that will make people’s heads swim, Oxford University Press agreed to change the meaning of the words “woman” and “man”—because of an online petition.

Incredibly, some of the most respected lexicographers in the world have thrown in the towel, caving to cries that certain words should be more “gender neutral.” And dictionaries, Apple TV makes clear, are just the tip of the iceberg.

The left’s high-speed gender train aren’t just coming for your bookshelf, but your sons and daughters too. This week, Apple TV is debuting a new docuseries meant to persuade parents that all children are gender fluid.

“Becoming You,” the show that LGBTQ activists are hailing as groundbreaking, follows 100 girls and boys around the world over their first five years, making the case that moms and dads shouldn’t hold hard and fast to biological realities.

“We hope the viewers take away an understanding that although young children talk about gender, their sense of it is much more fluid than ours,” executive producer Hamo Forsyth said. “So much so that kids of [3 and 4] can imagine they are genuinely going from one gender to the other as they change clothes during dressing-up games, for example. It isn’t really until they go to school at 5 that they start to think of gender as something more permanent.”

In a country where 12% of millennials now say they identify as transgender or “nongender conforming”—more than 1 in every 10—the last thing our children need is a generation of parents indulging these dangerous fantasies. And yet, that’s exactly the goal of Apple TV and their extremist cheerleaders.

Of course, Family Research Council’s Peter Sprigg points out the irony here is that by trying to brainwash every family, these LGBTQ activists are actually contradicting their own argument.

“If ‘all kids are gender fluid,'” Sprigg explains, “that means that not every kid who engages in gender-nonconforming behavior is innately ‘transgender’—and it certainly shouldn’t be a license to alter and mutilate their bodies.”

In some cases, maybe forming a “gender identity” is a developmental process that takes a few years, he agrees. “The problem with the aggressive transgender movement is that it disrupts that normal process by telling kids that what they like to do is ‘who they are’ and their bodies are irrelevant.”

It’s bad enough that America has a presidential candidate encouraging transgender treatments for elementary school kids. But suggesting that every parent should embrace this radical rejection of their child’s biological reality is a pathway to self-destruction and misery.

Just ask author Abigail Shrier. She’s talked to hundreds of families who are dealing with the fallout of this devastating ideology—many of them lifelong LGBT supporters who cannot understand why doctors, counselors, teachers, and activists are trying to lock their children into a future of gender confusion.

She was so compelled by the stories of heartbreak that she wrote a book warning parents, “Irreversible Damage: The Transgender Craze Seducing Our Girls.”

In it, Shrier explains that this is an issue of consensus for most parents, regardless of where they fall politically. “Unsuspecting parents are awakening to find their daughters in thrall to hip trans YouTube stars and ‘gender-affirming’ educators and therapists who push life-changing interventions on young girls—including medically unnecessary double mastectomies and puberty blockers that can cause permanent infertility.”

Not surprisingly, the fringe activists pushing this agenda have gone ballistic that someone like Shrier has the nerve to tell the truth about their agenda. They bullied Amazon into blocking ad buys for the book. Then, this past week, a single tweet was all it took to persuade Target to pull the title from its shelves. The move hardly came as a shock, since this is the same company that still allows men in its girls’ restrooms and changing rooms.

Before long, the American Civil Liberties Union jumped into the fray, with one of its attorneys tweeting, “Stopping the circulation of this book and these ideas is 100 percent a hill I will die on.” So much for the ACLU defending free speech.

Conservatives fumed, circulating the story across social media. Ultimately, the attention was too much and Target, probably fearing another boycott, backtracked.

Yesterday, we removed a book from Target.com based on feedback we received. We want to offer a broad assortment for our guests and are adding this book back to Target.com. We apologize for any confusion.

It was the right decision. If only, shoppers would agree, Target would show that same common sense in its bathroom policy.

To hear the truth about the transgender agenda that the left would do anything to hide, check out this interview with Shrier.