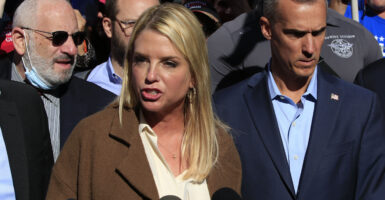 Several lawyers withdrew after reporting pressure from anti-Trump activists that included posting the lawyers’ names and contact information on social media. Twitter removed such information posted on its platform.

Of the lawyers who remain, some are litigating in court while others largely play a media role. Here are eight of them:

Interestingly enough, Justin Clark began a career in politics working for one of the last two candidates—a Democrat—caught up in a contested presidential election, then-Vice President Al Gore.

Clark did accounting work for Gore’s 2000 presidential campaign, NPR reported, on his path to taking the role of deputy campaign manager and senior counsel on the Trump 2020 reelection campaign.

Clark, 45, grew up as a centrist Democrat in Connecticut. Another centrist, Sen. Joe Lieberman, D-Conn., was Gore’s vice presidential pick in 2000.

Clark later evolved into a Republican, and in 2010 and 2014 he managed the unsuccessful Connecticut gubernatorial campaigns of GOP nominee Tom Foley.

Clark was deputy national political director for Trump’s 2016 campaign, then became director of the Office of Public Liaison in the White House after the New York developer was elected president.

Marc Scaringi, a lawyer in Harrisburg, Pennsylvania, is leading the Trump campaign’s legal effort in that state. Scaringi, 51, focuses his practice on business and corporate law and has about 20 years of experience.

Scaringi worked on then-Rep. Rick Santorum’s campaign for U.S. Senate in Pennsylvania. After Santorum won in 1994, Scaringi became his legislative correspondent in Washington.

Scaringi returned to Pennsylvania to work for Mike Fisher’s campaign for state attorney general, and served as an executive assistant to Fisher as attorney general from 1997 to 2001.

In 2016, Scaringi was a delegate to the Republican National Convention in Cleveland. He writes a biweekly column for The Patriot-News/PennLive and was a talk radio host in Harrisburg.

Scaringi is a member of the American Bar Association, Section of Business Law. He graduated Georgetown University in 1993 with a bachelor’s degree in history. He received his law degree from Widener University Delaware Law School in 2001.

“Donald Trump won … after you account for the fraud and irregularities that occurred,” Jesse Binnall, who is representing the Trump campaign in Nevada, said Tuesday.

He is a partner at Harvey & Binnall PLLC and president of Parliamentary Strategies, which the law firm owns. The company provides clients such as professional associations, political parties, candidates, with procedures for meetings, bylaw drafting, and interpretation.

Binnall is president of the Alumni Association for the Antonin Scalia Law School at George Mason University, according to his bio at the Republican National Lawyers Association.

Sidney Powell made news recently by calling out potential problems with voting machines made by Dominion Voting Systems and suggesting that enough evidence will emerge to overturn election results in several states.

Powell was a federal prosecutor from 1978 through 1988, serving as an assistant U.S. attorney for the Western and Northern Districts of Texas. In the Western District, she helped win the conviction of organized crime leader Jimmy Chagra for continuing criminal enterprises.

Powell became chief of the appellate sections for both court districts and represented the federal government in about 350 appeals cases. She went on to serve as an assistant U.S. attorney for the Eastern District of Virginia.

Powell is now a defense attorney who practices federal appeals cases in the 2nd, 4th, 5th, 9th, 10th, and 11th Circuits, as well as before the Supreme Court, according to her website. She represented Merrill Lynch executives in the Enron Corp. litigation.

Powell was president of the American Academy of Appellate Lawyers in 2001 and 2002.

She received her law degree from University of North Carolina School of Law after attending UNC as an undergraduate.

Powell became an outspoken critic of the Justice Department, writing the book “License to Lie: Exposing Corruption in the Department of Justice,” published in 2014.

Consovoy, 46, works primarily on appellate cases. He has been involved in cases on constitutional issues, interpretation and enforcement of federal statutes, administrative law, civil rights disputes, among others.

Consovoy, a former law clerk to Justice Clarence Thomas, also clerked for Judge Edith H. Jones of the U.S. Court of Appeals for the 5th Circuit and for the 17th Judicial Circuit of Virginia.

Pam Bondi is a former two-term Florida attorney general, elected in 2010 and again in 2014.

Bondi, 55, already familiar to viewers of Fox News Channel, became a familiar figure early in 2020 as one of Trump’s lawyers during his Senate impeachment trial.

She made strong arguments for the president on the Senate floor, but is largely a spokesperson for legal arguments, according to The Washington Post.

Bondi gained national prominence while Florida’s attorney general as one of the key Republican state attorneys general who sued to overturn the Affordable Care Act, better known as Obamacare. The Supreme Court upheld the law in 2012.

Also as Florida attorney general, Bondi filed litigation as part of the national opioid crisis. She led a legal fight in the national mortgage settlement case, and sued BP over the Deepwater Horizon oil spill, settling for more than $2 billion in economic relief for Florida.

Bondi is a member of the firm Ballard Partners, where she heads its corporate regulatory compliance practice, according to the Federalist Society. In this position, she helps Fortune 500 companies implement policies to address matters such as human trafficking, opioid abuse, and personal data privacy.

Rudy Giuliani has become a controversial figure as Trump’s personal lawyer and a central player in the impeachment controversy because of his investigations in Ukraine.

That’s a significant change from Giuliani’s status as national hero as New York mayor during the 9/11 terrorist attacks, adding to a reputation as a tough-on-crime executive and prosecutor.

Giuliani, 76, primarily serves the president as a media spokesman rather than a litigator, according to The Washington Post. Before serving as mayor, though, he had a distinguished legal career as a federal prosecutor.

Giuliani, a native of New York, went to work for the U.S. Attorney’s Office in Washington in 1973; he was appointed the attorney in charge of police corruption cases resulting from the high-profile Knapp Commission.

He returned to New York in 1977 to go into private practice, but in 1981, President Ronald Reagan appointed him as associate attorney general, the No. 3 position in the Justice Department.

In 1983, Reagan appointed Giuliani as U.S. attorney for the Southern District of New York. In this role, he gained national prominence for taking on drug dealers and the Mafia. He scored 4,152 convictions, of which only 25 were reversed on appeal.

Jay Sekulow became a prominent public face in defending Trump as his personal lawyer during special counsel Robert Mueller’s investigation and during the Senate impeachment trial.

Sekulow, 64, is chief counsel of the American Center for Law and Justice, a conservative legal group. He has argued 12 cases before the U.S. Supreme Court, many of them religious liberty cases.

One case was about allowing public school students to voluntarily belong to Bible clubs at school.

More recently, in the case Pleasant Grove City v. Summum, he won a unanimous ruling from the high court to allow governments to accept permanent monuments, such as Ten Commandments monuments, in public parks.

Sekulow founded the European Centre for Law and Justice based in Strasbourg, France, the seat of the European Court of Human Rights. He opened ECLJ offices in France, Russia, Zimbabwe, Pakistan, and Israel.

Legal Times named Sekulow to a list called “The 90 Greatest Washington Lawyers of the Last 30 Years.” Time magazine put him on its list of the “25 Most Influential Evangelicals.”