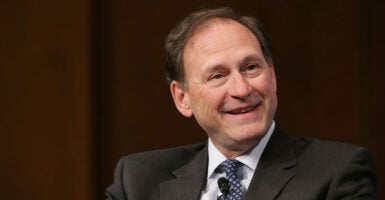 Alito did not shy away from offering his professional perspective on law and commenting on cultural issues, specifically religious liberty, gun rights, and the COVID-19 pandemic.

1. The Loudest Criticisms of the Speech Are Groundless

Following the release of his speech, Alito was lambasted for talking about his legal opinions, the Supreme Court, and culture in a public setting for all to see. Fix the Court called Alito’s speech “brazen political speech,” which was “full of disinformation on the state of the First Amendment, how women’s reproductive systems work and the goals of a milquetoast judicial ethics proposal.”

After listening to the speech, it’s clear that he didn’t say anything that people already wouldn’t have known from his written opinions, which are often quite scathing.

The late Justice Ruth Bader Ginsburg also regularly spoke about her role as a justice outside the Supreme Court. While justices often talk about their views on law, opinions they’ve written, or the general culture of the court, they don’t discuss how they might rule on an upcoming case. So there’s no reason for anyone to get upset that Alito spoke to a group of attorneys in an organization that aligns with center-right values.

If anything, Alito’s speech was not only fine but necessary: He of all people should know what is bothering Americans and what is at stake.

He’s had a bird’s-eye view of what’s ailing people around the country via the hundreds of petitions the court receives yearly—a temperature gauge of where law and culture intersect.

“In the end, there is only so much that the judiciary can do to preserve our Constitution,” Alito said. “Standing up for our freedom” is a job for “all Americans.”

Speeches like this help Americans know how the fight to preserve our democratic republic is really going.

2. Alito’s Right About the COVID-19 Debate

Alito’s speech as a whole might have been controversial to some, but his comments about the COVID-19 pandemic as it related to civil liberties were percipient.

In his speech, he probes the question, “What has [the pandemic] meant for the rule of law?” He deals with the subject carefully, without “diminishing the virus’” or its “threat to public health,” or questioning the “legality of COVID-19 restrictions.”

Nevertheless, he argues that many local officials have used COVID-19 to quell gatherings in religious settings. He concludes that the pandemic “has resulted in previously unimaginable restrictions on individual liberty.”

Alito mentioned, by way of example, a case that came before the court as indicative of this trend. A church in Nevada unsuccessfully petitioned the Supreme Court last summer for it to let the church host more than 50 people at a service, especially since local casinos were allowed to reopen without such a limit.

When the court refused to grant an injunction, Alito wrote a blistering dissent: “The Constitution guarantees the free exercise of religion. It says nothing about the freedom to play craps or blackjack, to feed tokens into a slot machine, or to engage in any other game of chance. But the Governor of Nevada apparently has different priorities.”

In his Federalist Society speech, it’s clear that his feelings haven’t changed. He said the court “allowed [religious] discrimination to stand” in the Nevada case.

Alito bemoaned the state of the Free Exercise Clause, saying, “Religious liberty is fast becoming a disfavored right.” This wasn’t just his personal opinion—by all accounts he based that on what he’s seen in the court.

He called the repeated lawsuits against the Little Sisters of the Poor a “protracted campaign,” and he bemoaned society’s unwillingness to let people state that “marriage is a union between one man and one woman.”

He said a society barreling toward anti-religious bigotry is a logical step following the Supreme Court’s decision in Obergefell v. Hodges, which made same-sex marriage legal.

3. Alito Is Worried About the First and Second Amendments

Alito said that when the court was looking into taking a case about firearm restrictions in New York City, it received a brief submitted by five leftist senators that essentially said the Supreme Court is probably subject to the influence of the ideological right, and that they would be forced to “restructure” the court—threats that have continued to this day.

“The senators’ brief was extraordinary … It was an affront to the Constitution and the rule of law,” Alito said.

The justices dismissed the case but are worried that other politicians might follow the example of their leftist peers and will also threaten the court to get what they want.

4. It’s Hard to Tell Which the Left Hates More, Alito or Religious Liberty

When Alito’s speech became public, the left had a bit of a fit. In fact, it was so upset about what he said, as well as the fact that he said anything at all, that it’s hard to tell what the left doesn’t like more: religious liberty or Alito himself.

A headline at the National Law Journal and law.com read, “In Caustic Speech at Federalist Society, Alito Takes Gloves Off.” The piece quoted a law professor saying, “This speech is like I woke up from a vampire dream. Unscrupulously biased, political, and even angry.”

Slate’s Mark Joseph Stern said his speech was “grievance-laden,” and “ultra-partisan,” to name just a few of the adjectives he threw around.

Are liberals OK? For a group committed to inclusivity and acceptance, much of the mainstream media and the left (but I repeat myself) seems committed to denigration, snark, and animosity.

While I could certainly see some right-of-center outlets expressing disagreement over Kagan’s public speeches, it seems like few would resort to saying her views “hit all the Marxist sweet spots,” but I could be wrong.

Alito even remarked that the Federalist Society is tolerant of other people’s views, something he says is “now in short supply.” The left’s reaction to Alito’s speech is concerning: Does it really hate what he said about religious liberty that much?

If leftists do indeed hate what Alito has to say about religious liberty, then that leads me to my final point: Alito’s speech shows just why conservatives have been so particular about filling vacant seats—not packing the courts—with originalist or textualist judges.

Conservatives believe that the Constitution protects free speech—even speech you don’t like. It protects the right to worship—even during the global pandemic. A textualist judge tends to rule to that end.

Alito’s powerful speech, a robust defense of the First and Second Amendments, and the left’s unhinged reaction to it, showed just why we need more people like him on the Supreme Court as well as in the lower courts.