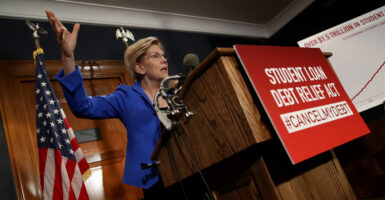 Senate Minority Leader Chuck Schumer, D-N.Y., along with Sen. Elizabeth Warren, D-Mass. (pictured), are calling on the next administration to forgive $50,000 in student loan debt for every borrower through executive order. (Photo: Win McNamee/Getty Images)

Senate Minority Leader Chuck Schumer, D-N.Y., and Sen. Elizabeth Warren, D-Mass., are calling on the next administration to forgive $50,000 in student loan debt for every borrower through executive order, doing so, in Schumer’s words, “with the pen as opposed to legislation.”

As higher education scholar Preston Cooper writes, “At a cost of roughly $1 trillion, that might be the most expensive policy ever enacted by executive order.”

Not only does such a proposal come with a breathtaking price tag for taxpayers, it’s simply unfair. Blanket loan forgiveness is regressive, rewards higher-earning graduate students, and sets a bad precedent for the future.

Student loan forgiveness is a quintessential example of regressive policy. As Cooper points out, “the top fifth of households holds $3 in student loans for every $1 held by the bottom fifth.” At the same time, those with the higher levels of debt (exceeding $50,000) “almost exclusively have bachelor’s degrees.”

For those individuals who avoided debt—either by working their way through college, going to community college for two years before attending a four-year college to reduce costs, living at home, serving in the armed forces to later benefit from the GI Bill, working hard in high school to receive merit-based aid, or by eschewing college altogether—blanket student loan forgiveness is simply unfair.

It’s particularly unfair to demand of the nearly three-quarters of Americans who do not hold bachelor’s degrees to pay off someone else’s debt. Such proposals mean those Americans without bachelor’s degrees are being forced to foot the bill for individuals who, statistically, are likely to out-earn them in the future.

Individuals with a bachelor’s degree earn on average $1 million more over the course of their careers than those with only a high school diploma.

Graduate students, many of whom pursue professional degrees by attending law school or medical school, make up a large portion of federal student loan borrowers. These borrowers often take out PLUS Loans—federal loans for graduate students that enable students to borrow up to the cost of school attendance. According to the Congressional Budget Office, PLUS Loans accounted for 24% of total federal student loan volume in 2017.

As a new Congressional Budget Office report finds, overall, “between 1995 and 2017, the balance of outstanding federal student loan debt increased more than sevenfold, from $187 billion to $1.4 trillion (in 2017 dollars).” The reason? It was in large part because the federal government more than doubled the number of new loans issued annually.

It Sets a Bad Precedent

It would also fuel further borrowing for degrees of questionable value in the marketplace. As the Cato Institute’s Neal McCluskey explained in “The Not-So-Great Society,” “rather than fueling increases in human capital, federal ‘help’ has powered a credential treadmill that has forced everyone to run faster just to stay in place.”

Student loan forgiveness is regressive, inequitable, and ill-conceived. Rather than increasing taxes on working Americans to assume someone else’s college debt, Washington should begin winding down its involvement in student loans, making space for private lending and alternative innovative financing models to emerge. Such options would better meet the needs of students while protecting taxpayers from continued exposure to outstanding student loan debt.