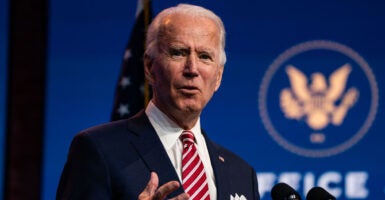 Liberal media figures and outlets are suggesting that Joe Biden should take an aggressive approach to conservative media when he becomes president of the United States.

“There is no question that Democrats are gearing up to use their new power to apply far more pressure than ever on Facebook, Google, Twitter, etc. to censor any views they deem ‘threatening,’” journalist Glenn Greenwald tweeted Monday, referencing comments made by former President Barack Obama about controlling the internet with “a combination of government regulations and corporate practices.”

“Please look at what is going here,” Greenwald continued. “Democrats are defining whoever opposes them not as adversaries but as national security threats, fascist terrorists, etc.—all to justify blocking them from the internet using their influence with Silicon Valley.”

The Intercept co-founder added that CNN, NBC, and The Atlantic are the outlets that are “most loudly” demanding that “disinformation” be suppressed, though these outlets are “the ones who not only sold the bullshit of the Iraq War but also the last 4 years of deranged Russia-took-over! conspiratorial insanity.”

“They want their discourse monopoly back,” Greenwald said.

His comments come the same day that Crooked Media founder Tommy Vietor published a piece explaining “Why Joe Biden Must Sideline Fox.” Vietor lamented that Fox News is treated as a “legitimate news organization” and says that Biden’s team should “Approach Fox News with eyes, not arms, wide open.”

“Call Fox what it is: an extension of the Republican Party,” Vietor wrote. “Say it often. Repetitive messaging works—just ask Lyin’ Ted and Low-Energy Jeb. Reject the absurd insistence that the network has a ‘real news’ division.”

The Crooked Media founder argued that Biden’s team should give his own publication, and other outlets like The Nation, “scoops and access” to help grow their audiences and “influence the way [President Donald] Trump’s team has nurtured fringe rags like Newsmax and OAN.”

“Biden’s team needs to fight harder on Facebook than it does in the White House briefing room,” he added.

Over the weekend, CNN’s Brian Stelter sparked a backlash for compiling a list of conservative media that he claimed is spreading “disinformation” on the election.

“There is an entire constellation of websites and talk shows that are in denial just like Trump,” Stelter said, showing a list of conservative media outlets that included Fox News, The Daily Caller, Newsmax, OAN, and more. “They are supplying disinformation about the election results, and wherever there’s a huge supply, there is a high demand.”

I’m not sure why you included us in this round up, @brianstelter … we have not been boosting the president’s fraud allegations. Actually we’ve been doing the exact opposite. I would ask for a correction, but I’m pretty sure this is intentional dishonesty. pic.twitter.com/hN3eqEcyaO

And in an interview with The New York Times, journalist Matthew Sheffield, who helped create several conservative websites, alleged that “the end justifies the means” to conservatives.

“Almost all right-wing support in the United States comes from a view that Christians are under attack by secular liberals,” Sheffield said. “This point is so important and so little understood. Logic doesn’t matter. Fact-checking doesn’t matter. What matters is if I can use this information to show that liberals are evil. Many of them are not interested in reporting the world as it is, but rather to shape the world like they want it to be.”

For much of the right-wing media, “fact-checking doesn’t matter,” said Matthew Sheffield, who founded several conservative websites. “Many of them are not interested in reporting the world as it is, but rather to shape the world like they want it to be.” https://t.co/LjyOWeivdm