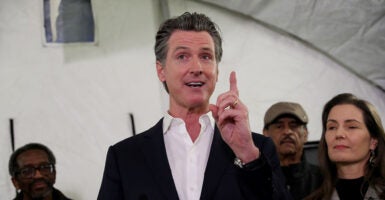 The era of one-man rule in California is over.

A California Superior Court has ruled in favor of me and fellow legislator James Gallagher in our lawsuit challenging Gov. Gavin Newsom’s abuse of power.

The judge ruled that Newsom violated the state constitution by unilaterally ordering that all registered voters be sent mail-in ballots. More importantly, she found good cause for a permanent injunction restraining Newsom from issuing any further unconstitutional orders that make “new statutory law or legislative policy.”

The court rejected Newsom’s extraordinary claim that a state of emergency centralizes the state’s powers in the hands of the governor, thus turning California into an autocracy. This is the unlawful basis on which Newsom has collapsed our system of checks and balances, issuing 58 executive orders and changing over 400 laws unilaterally.

Specifically, the judge rejected Newsom’s argument that Section 8627 of the Emergency Services Act gives him autocratic powers. At least 24 of his executive orders rely on that section.

As far as the most damaging order, Newsom’s arbitrary and unscientific lockdown scheme, that too is newly vulnerable. The Pacific Legal Foundation’s new lawsuit uses the same separation-of-powers argument our victory established as a successful legal theory.

“This color-coded Blueprint is complex in its mechanics and sweeping in its implications for businesses throughout the State. Business owners were left without a represented voice, as the Governor decided fundamental public policy for the State. … This continuing exercise of one-man rule violates separation of powers because only the Legislature is allowed to make these kinds of fundamental policy determinations under the California Constitution,” the suit reads.

Newsom’s response to the ruling is telling. He has vowed to appeal “as soon as permitted” and said he “strongly disagrees[s] with specific limitations the ruling places on the exercise of the Governor’s emergency authority.”

He knows that Judge Sarah Heckman’s decision—his first loss in court—stops him from ruling California by decree and is a powerful tool for peeling back every oppressive layer of his self-proclaimed autocracy.

But in the meantime, Newsom has just used his “Blueprint” lockdown scheme to impose more restrictions on 11 counties. This means closing more businesses and stopping schools from opening, even though he’s provided no evidence either is responsible for new COVID-19 cases.

This erratic leadership is why California is struggling as much as any state. During the COVID-19 era we have the third worst unemployment in the country, the fifth worst excess deaths west of the Mississippi, the biggest backlog of unpaid jobless claims, and are one of only seven states with a school closure order.

We are also the only state ordering lockdowns in the name of “equity.” Once Newsom moves a county back a tier, his “equity metric” can keep it there based on things like low voter turnout or insufficient tree canopies. Other states are doing the rational and decent thing by targeting resources to disparately impacted communities.

The costs of Newsom’s failures continue to pile up. Certain counties are facing a “tsunami” of mental health crises and suicides. This is a humanitarian crisis of the government’s creation.

California’s one-man rule, evidence-free policymaking, and worst-in-the-nation COVID-19 performance are all related: an autocrat need only convince himself he’s right.

Thankfully for the people of California, the judicial branch is starting to restore the rule of law and representative government that’s been taken away from them.