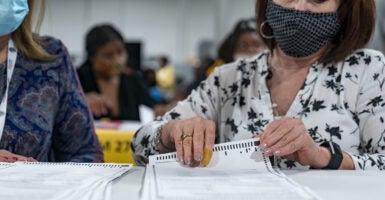 The Georgia election recount will not only determine whether former Vice President Joe Biden or President Donald Trump captures the state’s 16 electoral votes, but also will either help corroborate or debunk voter fraud claims made against Dominion Voting Systems.

Trump alleges Dominion Voting Systems, and the voting machines the election technology supplier uses, are responsible for widespread voter fraud during the 2020 election.

In a tweet Nov. 12, the president claimed that Dominion Voting Systems had deleted 2.7 million Trump votes.

And on Monday, Trump tweeted that “Dominion is running our Election. Rigged!”

The vote-counting machine company is based in Denver and Toronto, and supplies machines to 28 states across the country, including six of the most hotly contested states, Arizona, Georgia, Michigan, Nevada, North Carolina, and Pennsylvania, according to its website.

Dominion machines were used in all 159 Georgia counties for the first time in 2020. The new voting system caused some confusion during Georgia’s June primary as poll workers struggled to learn how to operate the machines, according to The Wall Street Journal.

Due to the confusion, Dominion Voting Systems sent about 900 technology workers to Georgia polls to ensure everything ran smoothly on Nov. 3, the Journal reported.

Despite the deployment of the tech workers, several Georgia counties experienced issues with the Dominion machines on Election Day.

In Morgan County, 60 miles east of Atlanta, and in Spalding County, 40 miles south of Atlanta, a glitch in the machines meant that voters could not cast electronic ballots for about two hours.

Gwinnett County, 30 miles northeast of Atlanta, experienced delays in recording of votes due to a “bad data card,” The Daily Signal reported.

The Associated Press reported that Biden had a lead of a little more than 14,000 votes over Trump in the Peach State heading into the recount. Just under 5 million Georgians voted in the 2020 presidential election.

The narrow lead Biden holds in Georgia caused both Trump and the state’s Republican Party to request a recount of votes by hand. The recount began on Friday and is scheduled to be completed by 11:59 p.m. Wednesday.

“The country is closely watching the results of Georgia’s hand recount. And for good reason,” Thomas Binion, vice president of government relations at The Heritage Foundation, told The Daily Signal in an email Tuesday.

Many are worried about the Dominion Voting Systems machines and whether they tampered with the vote results. If those results do not match the machine count, the investigation and audit of the machines need to begin immediately.

If they do match, we can rest a little easier about the credibility of the machines.

Last week, The Daily Signal reported that in 2014, Dominion Voting Systems donated between $25,000 and $50,000 to the Clinton Foundation, which is run by former President Bill Clinton and former Secretary of State Hillary Clinton. The company also works with Brownstein Hyatt Farber Schreck LLP, a law and lobbying firm that employs Nadeam Elshami, a former chief of staff to U.S. House Speaker Nancy Pelosi, D-Calif.

Those affiliations could be seen as a conflict of interest, Ty McCoy, a former assistant secretary of the Air Force, who is vice chairman of the Cyber, Space & Intelligence Association, told The Daily Signal last week.

Texas has refused to buy and use Dominion Voting Systems machines due to concerns over “multiple hardware and software issues,” according to the Texas Secretary of State’s Office.

Texas tested the company’s Democracy Suite 5.5-A system in 2019, but the examiner’s report raised “concerns about whether [it] …  is suitable for its intended purpose; operates efficiently and accurately; and is safe from fraudulent or unauthorized manipulation.”

Sidney Powell, one of Trump’s attorneys, appeared on Fox News on Sunday morning to explain the legal case being brought against Dominion.

She added that Trump’s legal team has “identified mathematically the exact algorithm they used and planned to use from the beginning to modify the votes in this case to make sure Biden won.”

Powell told Fox that she is confident that she and the rest of the president’s lawyers will be able to prove in court that software used by Dominion led to vote fraud during the 2020 election.

“Dominion does not administer or oversee the elections process,” Kay Stimson, vice president of government affairs at Dominion Voting Systems, told The Daily Signal in an email Tuesday.

The company has the highest commitment to election integrity, Stimson said, adding:

Dominion is fully committed to ensuring that Americans are confident in the accuracy and reliability of our voting systems. We are grateful to the Georgia Secretary of State’s Office and other chief state election officials across the nation, who continue to push back against false claims about election integrity, and seek to reassure the public that recounts and results-certification efforts are proceeding with accuracy and reliability.

Then, on Tuesday afternoon, during the hand recount, Fayette County uncovered 2,755 votes that were not included in the initial count, Atlanta’s WSB-TV Channel 2 reported. Of those, 1,577 were for Trump and 1,128 were for Biden, it said, reducing Biden’s edge in the state by 449 votes and leaving him ahead of Trump by 12,929 votes.

Rejecting the calls for his resignation, Raffensperger has continued to push back on claims of voter fraud in the state. In a series of Facebook posts Sunday, he touted the additional measures that have been implemented in Georgia to ensure election integrity.

“First thing I did as Secretary of State? Banned ballot harvesting. My proposal. We passed it in 2019,” he wrote, adding: “Truth matters. Integrity matters.”

The final results of the Georgia recount are expected to be known early Thursday morning.