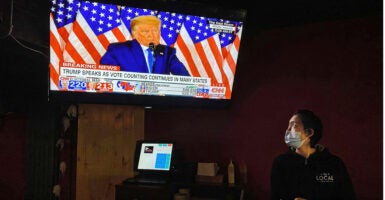 The Trump administration’s legacy of stalwart human rights advocacy for the Chinese people has been unprecedented. Pictured: A waitress in Beijing watches a speech by President Donald Trump at an election-watching event at a bar on Nov. 4. (Photo: Kevin Frayer/Getty Images)

Even as chaos and litigation over the presidential election persist, Secretary of State Mike Pompeo has not skipped a beat in his effort to counter the Chinese government and its human rights abuses.

The Trump administration has taken a multiagency, whole-of-government approach to addressing China’s growing ideological, economic, and military challenges to the free world.

Though the current momentum might dissipate under a Biden administration, for now, Pompeo presses on to secure the administration’s “tough on China” legacy.

The days since the election have not seen a slowing of the administration’s focus on China, to the vexation of Chinese officials.

On Nov. 9, the State Department sanctioned four Chinese officials for their role in enforcing China’s new national security law for Hong Kong, blocking their assets and banning them from the United States.

Widely criticized upon its passage in June, the new law seeks to address “national security” concerns, which Chinese authorities interpret to be any form of dissent.

In typical fashion, a Chinese Foreign Ministry spokesman called the sanctions an attempt to “grossly interfere” in China’s internal affairs.

The Trump administration has been critical of the Chinese government’s encroachment into Hong Kong, lamenting the stifling of the prosperous city under China’s authoritarian grasp and the end of all reasonable expectations for basic freedoms there.

The new sanctions followed the removal of the East Turkestan Islamic Movement from the State Department’s list of recognized terrorist organizations on Nov. 5.

It was a commonsense move because, as a State Department official said, “for more than a decade, there has been no credible evidence that ETIM continues to exist.”

The acknowledgement that this essentially defunct group poses no international terrorism threat delegitimizes Beijing’s insistence that its brutal crackdown on Uighur Muslims in the Xinjiang region is really “counterterrorism” measures.

Those actions are merely the latest in concerted efforts across U.S. agencies to hold China accountable for its violations of religious freedom and human rights.

The Treasury Department used perhaps the most powerful tool on the U.S. government’s tool belt for human rights this summer when it placed Global Magnitsky sanctions on several Chinese government officials and on a paramilitary organization in connection with their human rights abuses against the Uighur minority.

Global Magnitsky sanctions have a high evidentiary standard and rarely have been employed over violations of religious freedom, making this a bold move by the administration.

Meanwhile, dozens of Chinese companies remain on the Commerce Department’s blacklist for their contribution to China’s high-tech surveillance, forced labor, and mass arbitrary detention of Uighurs.

Some of the blacklisted artificial intelligence companies are responsible for the invasive facial recognition technology used to surveil, intimidate, and control Uighurs in Xinjiang.

Listed entities are prohibited from access to U.S. technology without special government approval.

For its part, the Department of Homeland Security vigilantly has issued Withhold Release Orders on products imported from China suspected to be made with forced labor from Uighur detainees. In July, Customs and Border Protection agents seized a 13-ton shipment of hairpieces thought to be valued at about $800,000.

The use of Withhold Release Orders is critical to preventing the Chinese government from profiting off of its system of forced labor of religious and ethnic minorities.

The wide-ranging approach from various federal agencies has proven highly effective at exactly what Chinese spokesmen accuse the U.S. of; namely, “interfering” in the Chinese government’s violations of its people’s human rights.

By highlighting China’s atrocities on the world stage, the U.S. shamed Chinese leaders for their bad behavior. And by targeting China’s ability to export products made with forced labor, profiting from human rights violations in Xinjiang will become more difficult.

Pompeo and other administration officials have routinely frustrated the Chinese government in its campaign of suppression against dissidents and religious believers.

For that, Pompeo and the others should be commended.

For the sake of those living within China’s borders, U.S. leaders ought to continue to use every feasible tool to promote religious freedom and human rights until all in China live free from oppression.