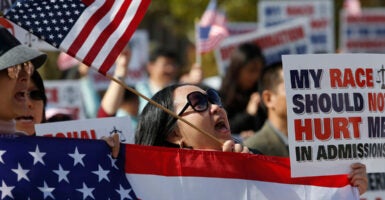 The decision, which comes after the 1st U.S. Circuit Court of Appeals heard arguments less than two months ago, upholds a decision from District Court Judge Allison D. Burroughs that favored Harvard after the case was heard in October 2018, the news agency reported.

The appeals court decided that the plaintiffs, Students for Fair Admissions, had standing for the lawsuit but affirmed Harvard’s admission processes, The Harvard Crimson reported.

Harvard spokeswoman Rachael Dane applauded the decision in an email to students.

“Today’s decision once again finds that Harvard’s admissions policies are consistent with Supreme Court precedent, and lawfully and appropriately pursue Harvard’s efforts to create a diverse campus that promotes learning and encourages mutual respect and understanding in our community,” Dane wrote, The Harvard Crimson reported.

“As we have said time and time again, now is not the time to turn back the clock on diversity and opportunity,” Dane added.

“While we are disappointed with the opinion of the 1st Circuit Court of Appeals, our hope is not lost,” Edward Blum, president of Students for Fair Admissions, said in a statement provided to The Daily Caller News Foundation.

“This lawsuit is now on track to go up to the U.S. Supreme Court, where we will ask the justices to end these unfair and unconstitutional race-based admissions policies at Harvard and all colleges and universities,” Blum said.

Harvard University did not immediately respond to a request for comment.