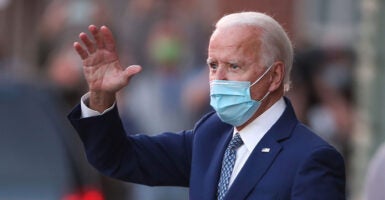 Former Vice President Joe Biden waves to supporters as he leaves The Queen theater after receiving a briefing from his COVID-19 advisory board on Nov. 9 in Wilmington, Delaware. (Photo: Joe Raedle/Getty Images)

The outcome of the 2020 presidential election continues to be hotly contested. But a transition of power from President Donald Trump to Joe Biden, if it happens, would have immediate and dramatic policy consequences.

If Biden actually does win the presidential election, the former vice president likely will be faced with a divided legislative branch.

Democrats will continue to control the House in the 117th Congress next year, but by a smaller margin, because Republicans picked up a still-undetermined number of seats. Meanwhile, the Senate likely will continue to be controlled by Republicans, depending on what happens in a pair of upcoming Senate election runoffs in Georgia set for Jan. 5.

That will necessarily narrow how much of his agenda Biden could get through Congress. However, according to reports, Biden likely would begin his presidency with a flurry of executive orders.

[Biden] will rejoin the Paris climate accords, according to those close to his campaign and commitments he has made in recent months, and he will reverse President Trump’s withdrawal from the World Health Organization.

He will repeal the ban on immigration from many Muslim-majority countries, and he will reinstate the program allowing ‘dreamers,’ who were brought to the United States illegally as children, to remain in the country, according to people familiar with his plans.

That list comes with just a bit of Washington Post spin, of course, but those aren’t the only executive orders we would likely see in the early days of a Biden presidency.

The following are three additional executive orders that Biden promised on the campaign trail that would represent a significant shift in policy.

A Biden administration would likely undo the so-called Mexico City policy, according to The New York Times. The policy restricts the funding of foreign organizations that provide or advocate for abortion abroad.

The Trump administration greatly broadened the Mexico City policy in 2017, when Trump reinstated it during his first week in office, reversing the stance of the Obama administration.

According to Melanie Israel, a research associate in the DeVos Center for Religion and Civil Society at The Heritage Foundation, the expanded policy ensured “that U.S. dollars are not entangled with the abortion industry and that American taxpayers do not subsidize nongovernmental organizations that do not respect innocent human life.”

“Biden will use executive action on his first day in office to withdraw the Mexico City ‘global gag rule,’” a Biden spokesperson said in July, The Washington Post reported.

That would be consistent with a Democratic Party that long ago moved on from the “safe, legal, and rare” stance on abortion of the Bill Clinton presidency to a position of abortion legal under all circumstances.

On the campaign trail, Biden promised a big pivot on Trump’s tough immigration priorities, especially with respect to the border wall.

“There will not be another foot of wall constructed on my administration, No. 1,” Biden said in an interview with National Public Radio in August. “I’m going to make sure that we have border protection, but it’s going to be based on making sure that we use high-tech capacity to deal with it.”

“Biden’s immigration plan would end the diversion of Pentagon funds to build a wall on the U.S.-Mexican border and instead invest in screening infrastructure at ports of entry,” Reuters reported on Saturday. “He said in August that he would not tear down border walls built under Trump, but would halt construction.”

Stanching the flow of illegal immigration with the border wall was a huge 2016 campaign issue for Trump, one that has been attacked aggressively by the left.

In an April interview with The Daily Signal, the acting secretary of the Department of Homeland Security, Chad Wolf, said that on top of the 126 miles of border wall that had been completed at the time, the administration planned further renovation to improve the existing wall while continuing its expansion.

According to USA Today, Biden intends to undo that order, which would be consistent with his pledge to combat what the left calls “systemic racism” in American society.

The former vice president and many in the media have described those sessions as “sensitivity” training, but that does not at all describe what they really are.

Christopher Rufo, a fellow at The Heritage Foundation, has done extensive research into what critical race theory training looks like in practice.

Those were just a few of many examples. Critical race theory more or less boils human behavior down to being a product of race and little else. It is a set of ideas adopted and promoted by “anti-racists,” such as Ibram X. Kendi, who openly promote racial discrimination in the name of “equity” and justice.