6 Things I Saw at Dueling Trump-Biden Rallies in Philadelphia 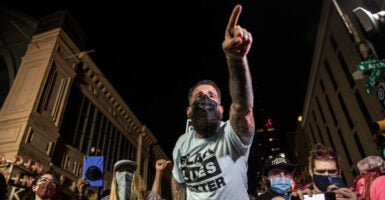 Supporters celebrating media reports that Joe Biden has won the presidency taunt supporters of Donald Trump from across the street Saturday outside the Philadelphia Convention Center. (Photo: Chris McGrath/Getty Images)

PHILADELPHIA—In the City of Brotherly Love, which skews heavily Democrat, there was a lot of rejoicing Saturday—and spewing of hatred of Donald Trump.

Crowds of thrilled Joe Biden supporters—buoyed by media outlets calling the presidential contest for the former vice president—gathered in the blocks around City Hall and the Convention Center, at times breaking into chants of “F— Donald Trump.”

People excitedly honked horns and cheered from the sidewalks. Also at the Convention Center, a smaller crowd, at least by the afternoon, supported Trump.

Here are six takeaways from my afternoon spent observing the dueling crowds.

1. After Time in China, This Woman Supports Trump

At the pro-Trump rally, a woman named Michelle told me that she supports Trump because of her experience living in communist China.

Michelle, who did not give her last name and who said she was from outside Philadelphia, said she was worried that if Biden becomes president, the U.S. will skew in the direction of “socialism.”

In China, “people’s voice cannot be heard,” Michelle said. “I think in the future, U.S. will be the same.”

Michelle said she left China 20 years ago “because I want freedom.”

Although plenty of people held Biden-Harris signs, many of the homemade signs seemed to be anti-Trump rather than pro-Biden. Here are some of the signs I saw in Philadelphia:

John McGuigan, who identifies as a “a gay patriot, a gay Trump supporter,” said he is worried about voter fraud.

“These people have committed voter fraud. I believe when the ballots are recounted by hand, Trump will come out victoriously,” said McGuigan, who lives in Cranford, New Jersey.

“There is massive voter fraud throughout this country,” he said. “It’s sickening. I don’t like people who invalidate our election process.”

“The media misrepresents him as a homophobe, a racist, and a misogynist,” he added. “All lies.”

When I asked McGuigan how he would talk to LGBT Democrat friends or family, he said:

I just blocked a whole bunch [of them] on Facebook yesterday. I said if you don’t respect my rights to support a man who has done so much for the gay community, I am no longer your friend. And you don’t allow me freedom of choice to vote for the candidate I believe in, we’re done. You’re not going to dictate to me who I should vote for. I just cut them out of my life.

I saw at least one “Black Lives Matter” face mask and a T-shirt.

Chalk on the ground referred to the death of Walter Wallace, a black man killed by two Philadelphia police officers Oct. 26 when he did not drop a knife he was holding despite repeated commands from police to do so. Wallace’s family says he suffered from mental health issues.

Dana P. said he was with the Trump supporters “because I’m a patriot. I love America.”

Dana, who was not comfortable giving his last name, said he previously voted for Barack Obama for president in 2008 and 2012. In prior years, he had voted for Ross Perot, Ralph Nader, and Jimmy Carter.

Why Trump? Dana said he rejected Hillary Clinton in 2016 over her decisions regarding Libya. And this time around he had concerns about Biden’s health and ability to be president for four years.

“A lot of people would say, if he’s a racist, he’s one of the worst racists that people have ever seen,” Dana added.

6. A City Ready for Violence

There was a strong police presence in Philadelphia, and plenty of businesses near City Hall and the Convention Center were boarded up.