Affirmative Action Goes Down in Flames in Deep Blue California 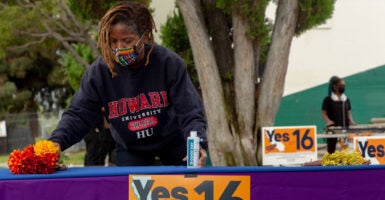 A Proposition 16 supporter sets up a table at a Proposition 16 rally at Dorsey High School in Los Angeles to urge the community to vote yes on the proposition Oct. 24, 2020, during early voting in California. (Photo: Allison Zaucha/The Washington Post/Getty Images)

Even in the deepest of deep blue progressive states, it appears racial preferences are unpopular once voters go into the voting booth.

On Tuesday, Californians rejected Proposition 16, a ballot measure that would have essentially ended California’s decadeslong ban on racial preferences for government and public institutions.

This ban was enacted by Proposition 209, which was passed in 1996. It mandated, according to Ballotpedia, that the state of California “cannot discriminate against or grant preferential treatment on the basis of race, sex, color, ethnicity, or national origin in the operation of public employment, public education, and public contracting.”

Proposition 16 would have officially allowed state institutions to return to the policies of affirmative action.

But despite the seeming headwinds in a year of protests, riots, and the 1619 Project—which essentially posits that America was founded on slavery and racism—Proposition 16 went down in defeat.

Its proponents say the issue was defeated because of unclear ballot language and messaging. Even if that was even a little bit true, it’s hard to see the double-digit defeat in one of the bluest states in the union as anything less than a rebuke and a landslide.

As I highlighted in my roundup of ballot initiatives around the country, affirmative action undermines the concept of equal rights.

There is also little evidence it provides a real boon to struggling minorities, and in many cases makes things worse.

There was certainly evidence of this following the passage of Proposition 209, as a Heritage Foundation paper noted of college admissions in 2015:

While minority students did drop from 58.6 percent of the student body to 48.7 percent, white students made up a bare majority, and Asian-Americans came in second at 38 percent. What happened to the other minorities?

But with the left moving away from equality to “equity,” which switches out equal rights for the concept of equal outcomes, it seems that issues like affirmative action may be back on the table.

It certainly works well with the ideology of so-called anti-racists like Ibram X. Kendi, who has received an enormous amount of press and money in the last year to preach his ideas to the American people.

Kendi has been quite open about the fact that he thinks racial discrimination is a good thing if, in his judgment, it levels modern and historic inequities between races.

Proposition 16 was a perfect example of a convergence between the so-called anti-racist social justice warriors and “woke” corporations.

It makes perfect sense that in a year of nonstop sermonizing by the media that America is a structurally racist country that affirmative action would be back on the menu for state policy.

Believe me, as a native of Oakland, it pains me to see my beloved A’s on this list.

But even with all that backing and support, Prop 16 went down by a pretty wide margin. It was deeply unpopular outside of only the most far left-wing bastions.

There can certainly be many reasons for this rebuke. Perhaps even many left-leaning Californians worry that a law allowing racial discrimination will ultimately hurt themselves and their children.

But as we’ve seen in many parts of the country, despite the nonstop drum beat from the press, and protests and riots around the country, a huge number of Americans still reject the poisonous ideologies of critical race theory and anti-racism.

They still cling, even if tenuously, to the principles of 1776.