Trump Takes His Case to Court in 3 Battleground States 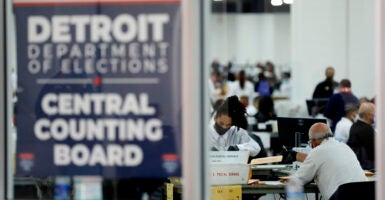 The Trump campaign seeks a recount in Wisconsin and has gone to court in Georgia, Pennsylvania, and Michigan over ballot counting rules to settle a presidential election that remains undecided.

The Trump campaign and some other news organizations disputed Fox’s Arizona call for Biden.

Most news outlets called both Wisconsin and Michigan for the Democratic nominee Wednesday. Ballots in Pennsylvania are still arriving in the mail.

On Oct. 19, the U.S. Supreme Court’s 4-4 deadlock left in place a Pennsylvania Supreme Court ruling in a lawsuit brought by the state’s Democratic Party. That ruling requires state  election officials to count absentee ballots received up to three days after the election, even without a postmark showing a ballot had been mailed by Election Day.

With Nevada, North Carolina, and Georgia still too close to call, Biden had a lead of 264 electoral votes to Trump’s 214 votes as of Wednesday evening, according to Fox News Channel. The New York Times, however, gave Biden 253 electoral votes.

Independent groups also will sue the state of Michigan, said Gordon Pennington, a poll watcher for the Election Integrity Fund, which advocates clean elections in Michigan.

Pennington said more than a recount is necessary in Michigan; a thorough examination should determine whether ballots are legitimate, he said.

Pennington, speaking from Cobo Arena in Detroit where Wayne County officials are counting ballots, accused them of not following the rules.

About 38,000 votes in the presidential election came in at 3:45 a.m. Wednesday without anyone explaining the point of origin or chain of custody for the ballots, he said. Under Michigan law, he added, ballots harvested or collected after 8 p.m. on Election Day are not supposed to be valid.

“If you are recounting fake ballots, what’s the point of a recount?” Pennington told The Daily Signal. “We need more forensics.”

The Trump campaign’s lawsuit argues that Michigan did not provide it with proper access to observe the opening of absentee ballots, and asks for a temporary halt to the counting until the campaign has “meaningful access” and the opportunity to review ballots.

Trump led in Pennsylvania, Wisconsin, and Michigan early Wednesday based on in-person voting. But Biden announced in a brief speech just before 1 a.m. that he believed he would win the presidency.

After 2 a.m., Trump essentially declared victory at the White House, accusing the other side of fraud.

Trump campaign officials say the president has a strong chance of  putting Arizona in his column; many news outlets called the state for Biden.

During his early morning remarks in the East Room of the White House,  Trump said: “We’ll be going to the U.S. Supreme Court—we want all voting to stop.”

The Trump campaign filed a lawsuit to halt vote counting in Pennsylvania over a lack of transparency, asking the U.S. Supreme Court to intervene.

A Pennsylvania Republican Party appeal already was before the Supreme Court on the question of whether the state may count votes that arrive in the mail from Wednesday through Friday.

Although it’s likely the Supreme Court would prefer to avoid weighing in on the presidential contest, it may be forced to decide, said Jason Snead, executive director of the organization Honest Elections.

Snead noted that the high court previously punted on Pennsylvania’s ballot-counting rules, making it more likely the court will have to hear the case after the election.

“It is utterly ridiculous, because Pennsylvania had time to prepare for Election Day,” Snead told The Daily Signal. “The court, if it gets to that point, had the opportunity before the election to put the pin in the grenade and didn’t take it. They may regret that.”

Even though Trump seemed to have a significant lead, Snead said he anticipates that Biden could flip Pennsylvania.

The Trump campaign has asserted irregularities in several Wisconsin counties and is asking for a recount in the state. But Snead said he doesn’t anticipate this effort will go far.

“In Wisconsin, it is their right to ask for a recount. But I don’t see a change there happening,” Snead said. “The margin is too great in Wisconsin. Recounts don’t usually change the outcome at that amount.”

Snead added that he doesn’t see evidence of fraud at this point.

“Just because it takes longer to count does not mean there is massive fraud or malfeasance,” he said. “It could be bureaucratic incompetence.”

Asked about Michigan, he said it is likely a matter of counting absentee ballots.

Snead said Trump likely will carry Georgia and North Carolina, but that litigation could expand to Nevada and Arizona.

“If it is close in any of these [states], there could be litigation,” Snead said. “If Arizona flips red—I’m not sure it would, but the Trump campaign is bullish about it—the Biden campaign could initiate litigation.”