Trump Gains Ground Among Minority Voters, but Loses Some With Whites 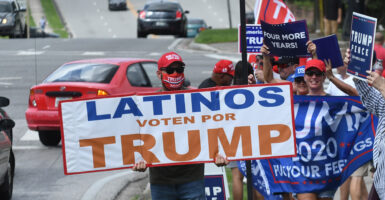 President Donald Trump expanded his share of both the black and Hispanic vote from four years ago, based on exit polling, even as the presidential race remains undecided.

Trump’s share of votes fell by nearly the same proportion among white and male voters, according to exit polling by The New York Times compared to its 2016 exit polling.

The president held on to the same slice of the female vote, 42%, as four years ago.

He also doubled his percentage of votes among LGBT voters, a comparison of the Times’ exit polling in 2016 and 2020 shows.

Florida, where the Latino community is diverse, went for Trump at a higher level than the nation as a whole. The president won 55% of the Cuban American vote in Florida, NBC News reported, and 30% of Puerto Ricans and 48% of “other Latinos” backed Trump.

By a separate count, Republicans gained their highest nonwhite percentage of the vote since 1956, according to GOP consultant Adrian Gray, who worked in the George W. Bush administration and for the Republican National Committee.

A preliminary estimate shows Trump with 26% of the nonwhite vote compared with 21% in 2016, Gray says. That would be on par with what Republican nominee Dwight Eisenhower got in 1952.

In every presidential election year from 1964 through 2012, the Republican nominee gained less than 20% of the nonwhite vote.

Trump improved his performance among what is presumably a reliable voting bloc for Democrats by nearly doubling his 14% of LGBT voters in 2016 to 27% this week, according to the Times’ exit polling.