No Winner Yet: Fight for White House Could Drag on for Days or Weeks 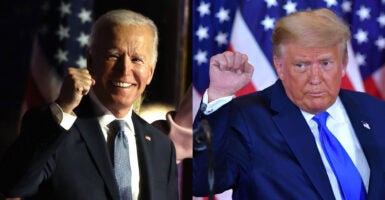 For the first time in years, Americans will wake up Wednesday morning after the presidential election uncertain of who their president will be on Jan. 20.

But the key battleground states of Georgia, Michigan, North Carolina, Pennsylvania, and Wisconsin still had not been called by 6 a.m. Wednesday.

Neither the Republican ticket of Trump and Vice President Mike Pence nor the Democratic ticket of Biden and vice presidential nominee Kamala Harris, a senator from California, had reached the necessary 270 electoral votes.

The results in Pennsylvania may not be known for days or longer. That’s at least in part due to the prevalence of mail-in and absentee voting this year in the face of the COVID-19 pandemic.

Before 1 a.m., Biden addressed horn-honking supporters in a parking lot in Wilmington, Delaware, speaking for just over three minutes.

“I’m here to tell you tonight we believe we are on a track to win this election,” Biden said. “We knew because of the unprecedented early voting—the mail-in vote—[and] it’s going to take a while. We’re going to have to be patient until the hard work of tallying votes is finished. It ain’t over until every vote is counted, every ballot is counted.”

At about the same time, Trump tweeted a warning of an attempt to steal the election.

Trump spoke to supporters in the East Room of the White House for more than 10 minutes, starting at 2:21 a.m. Wednesday.

“I want to thank the American people for their tremendous support. Millions and millions of people voted for us tonight, and a very sad group of people is trying to disenfranchise that group of people, and we won’t stand for it,” Trump told his extended family and supporters.

Trump referred to his leads in Georgia, Michigan, North Carolina, Pennsylvania, and Wisconsin, and added, “They can’t catch us.”

The president predicted that Democrats now will go to court, saying:

This is a fraud on the American public. This is an embarrassment to our country. We were getting ready to win this election. Frankly, we did win this election. … We’ll be going to the U.S. Supreme Court. We want all voting to stop. We don’t want them to find ballots at 4 a.m. in the morning and add them to the list.

In 2000, the election dispute between Republican George W. Bush and Democrat Al Gore over Florida’s 25 Electoral College votes was litigated all the way to the Supreme Court.

Litigation could be more complicated this time, with multiple states at stake and more electoral votes in question.

If mail-in voting delays the outcome, some of those issues should have been predictable, said Hans von Spakovsky, manager of The Heritage Foundation’s Election Law Reform Project.

“In a New York primary [in June], there was a large number—an unacceptably large number, in my view—of absentee ballots that were rejected,” von Spakovsky told The Daily Signal. “In key states, if the number of rejected ballots is larger than the margin of victory, you will see litigation over every one of those ballots.”

Different states have different standards for accepting or disqualifying absentee ballots, and as such, the high court will likely have to hear the cases for most states individually, von Spakovsky said. That’s unlike the postelection dispute in 2000 that saw just one state, Florida, in dispute. Bush eventually won the state by just 537 votes.

Another potential scenario would be the states in question could certify competing electoral returns, as happened in the 1876 election, in which the states of Louisiana, South Carolina, Florida, and one electoral vote in Oregon were in dispute. Congress appointed a bipartisan commission of eight Republicans and seven Democrats made up of members of the House, Senate, and the Supreme Court.

After the commission issued predictable 8-7 votes awarding the disputed votes to Republican Rutherford B. Hayes over Democrat Samuel Tilden, the Democrat-controlled House and Republican-controlled Senate fought over whether to accept the recommendations before reaching a deal that involved ending Reconstruction in the South.

In the elections of 1800 and 1824, no candidate had a majority of electoral votes, which threw the election to the House of Representatives to decide.

This article has been corrected to reflect the last time the outcome of a presidential race wasn’t known in the hours immediately after polls closed. A statement released prematurely also has been removed from this article.