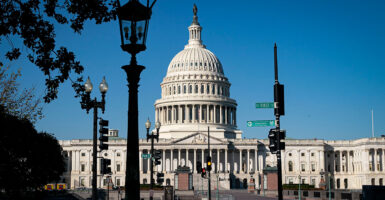 The House Freedom Caucus has pressed the larger GOP conference on issues ranging from spending and taxes to abortion and religious liberty. (Photo: Al Drago/Getty Images)

A group of vocal conservatives in the House stands to gain seven or more new members after Tuesday’s election results are all in.

The House Freedom Caucus has pressed the larger GOP conference for more than five years on issues ranging from spending and taxes to abortion and religious liberty.

The Freedom Caucus expects to add new members as, according to an Associated Press report, House Democrats’ only gains as of midmorning Wednesday were two North Carolina seats vacated by Republican incumbents after a court-ordered redistricting. Democrats lost seven or more incumbents and appeared headed to a smaller majority, AP reported.

The Freedom Caucus has been led since its inception in 2015 by vocal lawmakers such as Rep. Jim Jordan, R-Ohio, and Rep. Mick Mulvaney, R-S.C., later director of the White House Office of Management and Budget. The caucus doesn’t share its exact number of members, but put its number at about 30 in 2020.

The House Freedom Fund, which works to elect “strong conservative candidates to Congress,” highlighted 18 candidates who likely would join the Freedom Caucus if elected Tuesday.

Of those 18, early unofficial results indicate seven won their races. They include:

In California, Darrell Issa may return to the House to represent the 50th Congressional District, which includes much of San Diego County.

Issa, a former chairman of the House Oversight and Reform Committee, represented the state’s 48th Congressional District from 2003 to 2019. Results so far show him neck and neck with Democrat Ammar Campa-Najjar to win the vacant seat.

Also in Illinois, businesswoman Mary Miller will represent the 15th Congressional District in the state’s eastern and southeastern area. Miller defeated Democrat Erika Weaver by 71.5% to 28.5% in unofficial results to win the seat held by retiring Rep. John Shimkus, a Republican.

In Florida, Byron Donalds, a member of the state House from 2016-2020, will represent the 19th Congressional District, which includes Cape Coral, Fort Myers, Naples, and Marco Island. Unofficial results had Donalds defeating Democrat Cindy Banyai by 61.2% to 38.7% in the race for the seat held by retiring Rep. Francis Rooney, a Republican.

In Georgia, businesswoman Marjorie Greene will represent the 14th Congressional District, which includes almost all of the northwestern part of the state. Greene defeated Democrat Kevin Van Ausdal by 74.7% to 25.2% to win the seat held by retiring Rep. Tom Graves, according to unofficial results.

In Alabama, veteran and businessman Barry Moore will represent the 2nd Congressional District, in the southeastern portion of the state. Moore defeated Democrat Phyllis Harvey-Hall by 65.3% to 34.7% in unofficial results to win the seat held by retiring Rep. Martha Roby, a Republican.

In Texas, Ronny Jackson, a retired Navy rear admiral who served as President Donald Trump’s White House physician, will represent the 13th Congressional District, which includes most of the Texas Panhandle, parts of Texoma, and northeastern parts of North Texas.

Jackson, who Trump briefly nominated as secretary of veteran affairs, defeated Democrat Gus Trujillo by 80.5% to 17.4% in unofficial results in the race for the seat held by retiring Rep. Mac Thornberry, a Republican.