As the Counting Continues, the Legal Wrangling Ramps Up 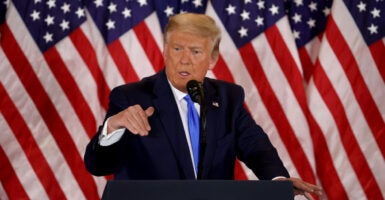 In his election night speech, President Trump accused “a very sad group of people” of trying to “disenfranchise” millions of people across the country who voted for him. (Photo: Chip Somodevilla/Getty Images)

Election experts for months have predicted that an army of lawyers, not actual voters, would determine the final outcome of the presidential election because key battleground states would end up so excruciatingly close.

The legal threats and wrangling have begun. The big question now is when it will end and provide Americans with an outcome.

In the weeks leading up to Nov. 3, Pennsylvania was already a legal and electoral battleground. After a chaotic election night of shifting ground in other key swing states, it is now ground zero for a legal showdown that will determine whether the nation sees another four years for President Donald Trump or a Joe Biden administration.

Trump pledged as much during a combative 2 a.m. press conference in the White House East Room. He started out highlighting a number of states where he was ahead by wide margins but where officials were still counting votes. He then accused “a very sad group of people” of trying to “disenfranchise” millions of people across the country who voted for him.

“We won’t stand for it,” he declared before pledging to go to the Supreme Court to put a stop to “all voting.”

“We don’t want them to find any ballots at 4 o’clock in the morning,” he said. “To me this is a very sad moment. We will win this. As far as I’m concerned, we already have won.”

Hours earlier, Biden expressed the opposite sentiment, saying he’s confident that a clear path to victory for him remains and urging his supporters to wait patiently while all the votes are counted over the coming days.

“It’s going to take time to count the votes, but we feel good about where we stand,” he told the crowd at a drive-in event in Wilmington, Delaware, where supporters honked their support in response.

“I’m optimistic about this outcome. … Thank you, thank you—your patience is great,” he added.

Election lawyers—both Republicans and Democrats—immediately questioned the meaning of Trump’s legal threat, speculating that he wasn’t trying to put a stop to “voting” but the counting of ballots in several closely contested states the media had yet to call for either candidate.

Regardless, Fox News anchor Chris Wallace decried the president’s bellicose remarks as the country braced for political unrest in major cities across the country.

“This is an extremely flammable situation, and the president just threw a match into it,” Wallace said.

“Our lawyers are warming up in the bullpen to make sure every vote is counted” and that there is only one vote per person, he said.

In recent days, Democrats tried to lower expectations that the race would be decided on election night. Biden campaign officials and their surrogates argued that vote-counting would likely continue well past Nov. 3 in several key swing states, particularly Pennsylvania where state officials decided to allow mail-in ballots to be counted up to three days after Election Day.

Vote-counting also continued into Wednesday in the Midwest battlegrounds of Wisconsin and Michigan, along with Georgia and North Carolina. As of early Wednesday morning, Trump maintained leads in Pennsylvania, Michigan, Georgia, and North Carolina, but Biden had a narrow advantage in Wisconsin, 49.4% to 49.1%.

In the week leading up to the election, Trump repeatedly accused Keystone State officials and courts of trying to rig the vote in Biden’s favor by allowing the receiving and counting of absentee ballots until Friday, an extension ordered by Pennsylvania’s top court, which Republicans challenged.

The Supreme Court last week let that decision stand, but several of the justices signaled an openness to taking up the issue after the election if the outcome hinged on Pennsylvania and those remaining votes could make a difference.

Newly minted Justice Amy Coney Barrett, who joined the court a week ago, declined to participate in the decision not to weigh in on the issue before the election, arguing she had not had enough time to review the briefs.

Back then, Trump pledged to unleash an army of lawyers as soon as the polls closed. And early Wednesday morning he appeared poised to make good on that threat.

“We’re going to go in the night of, as soon as that election is over; we’re going in with our lawyers,” Trump vowed over the weekend.

Bob Bauer, a veteran election lawyer and top Biden campaign adviser, dismissed the Trump team’s threatened lawsuits, and labeled many that the campaign or its surrogates had already filed as “unserious,” “doomed to failure,” and designed to generate a cloud over the election rather than “bona fide” legal claims.

For instance, several Democrats, including Rick Hasen, an election law professor at the University of California, Irvine, ridiculed Texas Republicans’ attempt to get 127,000 drive-thru votes in Harris County thrown out as “absolute garbage.”

But other GOP legal experts said the success or failure of many of the lawsuits could hinge on whether the claims are aimed at upholding state election laws.

Suits impacting Pennsylvania and other key battlegrounds, such as North Carolina, have a much stronger legal basis because they are aimed at upholding statutes passed by the legislature over changes made by state and local officials, including election boards.

John Yoo, a professor at University of California, Berkeley, who served in the Justice Department under President George W. Bush and was involved in the Bush v. Gore showdown, said the Constitution gives state legislatures broad authority to determine election laws at the state level.

“A state court can’t just intervene and change the state legislature’s decisions” about how the state will run its elections, Yoo told RealClearPolitics. That includes decisions on establishing deadlines for returning mail-in ballots, the numbers of envelopes voters are required to use for mail-in ballots, along with postmark and matching signature rules.

The Republican challenge to Pennsylvania’s three-day extension is still a “live case at the Supreme Court,” Yoo pointed out, and the Trump and Biden campaigns are waiting to see if the justices decide whether to hear the case now that Pennsylvania is playing such a pivotal role in the election’s outcome.

Likewise, if North Carolina remains close, the Supreme Court could reverse itself and take up a GOP lawsuit challenging a decision by the state board of elections to extend the period in which absentee ballots can be accepted and counted—up to nine days after Election Day, or Nov. 12. Late last week, the high court decided 5-3 not to weigh in, for the time being.

Yoo also argued that either Trump or the Biden campaign could decide to invoke the little-used precedent established in Bush v. Gore, when the Supreme Court stopped the recounts in the Florida 2000 presidential election, thus determining the outcome in Bush’s favor.

In that landmark case, the high court ruled that “all counties across a state have to apply the same standard to counting votes.”

In this way, team Trump could object to any discrepancy in vote-counting across different counties in Pennsylvania and other states where the vote remains close, he said.

Either campaign could also challenge the way in which provisional ballots are being counted.

Hans von Spakovsky, an election law expert at The Heritage Foundation, pointed to the six-week delay in counting and certifying of votes in New York’s June 23 Democratic congressional primary.

Election workers were unprepared to handle the influx of mail-in votes, and New York officials rejected nearly 80,000 ballots over issues such as voters forgetting to sign their ballots or ballots that were postmarked too late.

“The problem with absentee ballots is they have a higher rejection rate than ballots cast at the polling place, and it’s because voters make mistakes” filling them out, von Spakovsky told RealClearPolitics.

Social distancing rules designed to protect against COVID-19 spread also could spur lawsuits. For example, there were reports out of Philadelphia on Election Day that poll watchers were kept so far from election officials inspecting ballots that they couldn’t effectively observe the process.

“If you have election officials working in close vicinity with one another to scrutinize ballots, there’s no reason that observers can’t also be close enough to see what’s happening,” said von Spakovsky. “If that was happening, then I think both parties ought to file suit because that’s part of the transparency of the process.”

With so many issues available to raise, the legal jockeying could continue for several weeks. In Bush v. Gore, the Supreme Court made its determination on Dec. 12, just two days before Electoral College electors in each state made the outcome official.

Veterans of that drawn-out legal brawl urged Americans to have faith in the country’s institutions. Fox News’ Brit Hume said Tuesday night that the country survived that protracted election and it can survive this one too—even if it may not feel that way right now.