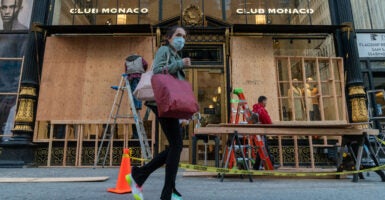 Businesses across America are bracing for the possibility of violent riots and looting following the Nov. 3 election. Pictured: A person walks by a crew of workers boarding up a Club Monaco store in New York City Nov. 2. (Photo: David Dee Delgado/Getty Images)

Businesses in cities around America are prepared for violence and looting following Tuesday’s election.

Shops, restaurants, and other businesses in Washington, D.C.; New York City; and Los Angeles have spent time over the past several days installing boards over windows and doors to deter vandals from breaking in.

Some residents in D.C. are even being encouraged to stockpile food in case it is not safe to go out in the days following the election.

George Washington University in D.C. emailed its students and asked them to consider stockpiling food and other goods in preparation for the unrest.

“We suggest preparing for the Election Day period as you would for a hurricane or a snowstorm that would prevent you from going outside for several days to grab food or order takeout,” Christy Anthony, the director of the Office of Student Rights and Responsibilities at George Washington University, wrote in an email to students, per student newspaper The GW Hatchet.

Here are 18 photos of businesses preparing for the unrest that may follow the Nov. 3 election.