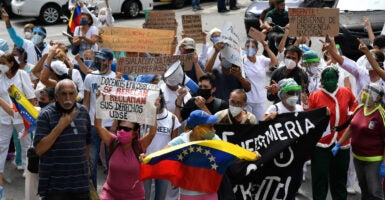 Three Hispanic Americans who have lived under socialist governments spoke out on the destructive influence of socialism in America at a recent event held by the LIBRE Institute. Pictured: Health workers protest the lack of medicine, medical supplies, and poor conditions in hospitals and demand fairer salaries in Caracas, Venezuela, Oct. 29. (Photo: Federico Parra/AFP via Getty Images)

A refugee from Cuba and dissidents from Nicaragua and Venezuela are warning Americans against the allure that some see in socialism and big government.

“A lot of people—because they were born under liberty [here in the U.S.]—think all the problems have to be solved with the opposite, with socialism,” said Andres Guilarte, a political activist fighting for freedom in socialist Venezuela.

Guilarte made his remarks at an Oct. 22 policy forum, “Understanding the Dangers of Socialism and Communism,” hosted by the LIBRE Institute, an Arlington, Virginia-based nonprofit, nonpartisan organization dedicated to strengthening the U.S. Hispanic community and lessening its reliance on government.

The event was aimed at informing the general public about the dangers of socialism and communism in the U.S. through testimony from individuals who have experienced life under a communist or socialist system firsthand.

Moderated by Daniel Garza, president and chairman of the LIBRE Institute, the forum presented the views of three Hispanic American individuals who shared their experiences from Cuba, Venezuela, and Nicaragua, three communist or socialist countries that earned Global Freedom Scores in 2020 from Freedom House of 14, 16, and 31, respectively.

The Global Freedom Index is “an annual global report on political rights and civil liberties” that calculates a country’s annual ranking and freedom status on a scale of 0 (“Not Free”) to 100 (“Free”). All three countries represented by the panelists earned a status of “Not Free” in 2020 using Freedom House’s methodology.

As part of its vision of raising the next successful generation of U.S. Hispanics, the LIBRE Institute promotes a free-market, freedom-maximizing philosophy of limited government. That’s best encapsulated by Garza’s introductory warning at the event:

For some time now, we have seen now almost a normalizing of socialism and socialist-type ideas and policies. The kind that centralizes more power and more control and more money in the hands of a central government, in this case, Washington, D.C.

What has been breathtaking is how popular and how wide these ideas have been spreading to America writ large.

One of the speakers, Otto Reich—who served as a diplomat in three Republican presidencies—shared his family’s experience with Nazism in World War II Germany and close encounter with communism in Cuba.

My father was an Austrian refugee. He had fled the Nazis in 1938 and managed to escape by crossing the Alps into France and then joining the French Foreign Legion. When the French surrendered, he managed to get on a Portuguese freighter and ended up in Havana, Cuba.

A lot of people associate socialism, incorrectly, only with extreme left policies. The fact is that the regime that my father left and that killed all of his family was a socialist regime—the National Socialist Party of Germany—and which later annexed Austria and invaded many other countries in Europe and caused the death of an estimated 44 million people in the war.

Born in Cuba in 1945 shortly after the end of World War II, Reich, together with his family, fled the Caribbean island nation for the U.S. when he was 15, at about the time communist dictator Fidel Castro came to power in Havana.

Another panelist, Kitty Monterrey, shared her experience with communism. Monterrey is the national president of the party Citizens for Liberty (Ciudadanos por la Libertad) in Nicaragua and is a dual national of both the United States and Nicaragua.

I know what democracy is. I know what socialism is. I’m going to go back in the 1970s when I was here in Nicaragua under a military dictatorship similar to what happened in Cuba with Fidel Castro. We had [Anastasio] Somoza, and we thought nothing could be worse.

Most of the country supported the guerrilla movement at the time to overthrow Somoza. We thought that finally we’d have peace and democracy, and we were wrong.

The results of the civil war did not bring democracy. It resulted in a Marxist government, which immediately took away all of our freedoms, and then in the 10 years that followed, Nicaragua became the second-poorest country in the Americas. There was no such thing as human rights, food was rationed, private property was confiscated, and thousands fled the country into exile.

The Nicaraguan Revolution saw the overthrow of the U.S.-backed Somoza dynasty and the triumph of the Sandinistas, the anti-imperialist socialist political party that sought to replicate what it saw as the “success” of the Cuban Revolution and to “liberate” the country from U.S. control.

Despite their success in ousting Somoza, the Sandinistas did not “liberate” the people of Nicaragua. Nicaraguans instead witnessed the replacement of one brutal regime with  another. The Sandinistas ruled Nicaragua with an iron fist under the leadership of Sandinista National Liberation Front leader Daniel Ortega, who has been president since January 2007 on top of a prior 11 years in office from 1979 to 1990.

Guilarte discussed what it was like growing up in Hugo Chavez’s Venezuela.

“When I was in high school, I actually believed in socialism. Because that was the norm for everyone,” he said. “There was no room for you to develop other opinions … . Most of my professors at the time were Chavistas.”

Only after attending the university and being exposed to different perspectives did Guilarte realize he had been indoctrinated.

“It was not until I left [high school] and I entered college that I started seeing other ideas,” he said.

Venezuela has been experiencing an economic crisis for years now. The crisis there began in 2010 during the presidency of Chavez, but significantly worsened under the authoritarian regime of his successor, President Nicolas Maduro, who came into power in 2013 upon Chavez’s death.

Since assuming power, Maduro has slashed political freedoms, engaged in electoral fraud, and sent the Venezuelan economy into a downward spiral that has produced the world’s worst migration crisis in modern history.

Venezuela is now considered a “failed state” by the international community, thanks to the socialist policies of Chavez and Maduro.