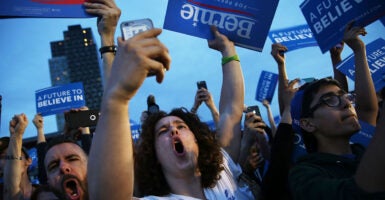 Americans should be concerned about the spread of socialism on campus, and its fallout on the rest of the country. Pictured: Supporters of Sen. Bernie Sanders, I-Vt., cheer at a rally during Sanders’ 2016 presidential campaign. (Photo: Spencer Platt/Getty Images)

Karin Lips is the president of the Network of Enlightened Women, a senior fellow with Independent Women’s Forum, and the editor of “She’s Conservative: Stories of Trials and Triumphs on America’s College Campuses.”

Just last year, the Xavier University student newspaper announced nine new student clubs, including a chapter of the Network of Enlightened Women, which I serve as president. What caught my eye is that the Xavier Socialists Club was started at the same time.

According to the Socialists Club president, the organization is for students interested in “direct action to help correct injustices that result from the oppressive capitalist society that we live in.”

Young socialists have been getting organized on campus, especially since Sen. Bernie Sanders, I-Vt., ran for president in 2016.

The top five ranked schools in America all have socialist clubs: Princeton, Harvard, Columbia, Massachusetts Institute of Technology, and Yale. These clubs aren’t limited to just at a few elite universities, either.

Young Democratic Socialists of America has a substantial social media following—about 36,000 followers on Twitter, only 6,000 less than the 42,000 followers for the College Democrats account.

These clubs are training a new generation of activists. In addition to supporting student chapters and an active social media presence, the Young Democratic Socialists of America offers curriculum on socialism as a School of Socialism, which explicitly describes the important role higher education plays on the road to a socialist revolution:

If colleges and universities now are focused on training us to be better workers, and the liberal response is to say that learning is a good in and of itself, then the socialist response is that education is a tool for class struggle.

We often think of education merely as a tool for the capitalist class, when in reality, it is essential to fomenting working-class resistance on campus and in broader capitalist society.

These socialists aren’t trying to play nice with capitalists.

Jabari Brisport, a candidate for New York State Senate, said at the YDSA Convention this summer, “We’re all socialists, comrades, one organization. We’re striving together toward the abolition of capitalism.”

When I was in college 15 years ago, progressive students didn’t embrace the socialist label as they do today. The progressives on campus were part of the College Democrats, which served as a moderating force. With their own clubs, there is no longer an institutionalized force tempering socialists.

College campuses are often turned into laboratories of leftist ideas.

The extreme ideas developed on college campuses, such as cancel culture, are permeating our culture at the highest echelons of business, politics, and art. What happens on campus quickly spreads when graduates rise in the ranks of positions of power in society.

In the short term, this shift toward socialism might affect elections. Experts expect millennials and Generation Z to make up 37% of the electorate this year. They expect Gen Z to surpass the so-called Silent Generation for the first time.

Imagine a Congress full of people who think like Sanders.

Americans should be concerned that what we are seeing on campus is contributing to a larger shift in how young people think about socialism and capitalism. Their outlook is going to have a larger effect on our country’s politics in the years to come.

Unfortunately, what happens on campuses doesn’t stay on campuses when it comes to leftist movements.