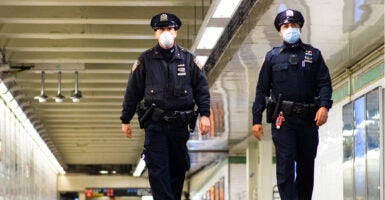 Around 2,400 NYPD officers filed for retirement as of Oct. 6, compared to around 1,300 during the same time frame in 2019. Pictured: NYPD officers patrol inside the Times Square station as the New York City subway system is set for nightly cleaning due to the continued spread of the coronavirus May 6, 2020, in New York City. (Photo: Eduardo Munoz Alvarez/Stringer/Getty Images)

The New York City Police Department, the largest law enforcement force in the nation, has seen a nearly 90% rise in retirements so far in 2020, the NYPD told Fox News.

Additionally, a total of 372 cops have resigned as of Oct. 6—five more than the same time frame in 2019, the NYPD told Fox.

“The NYPD has seen a surge in the number of officers filing for retirement,” the spokesperson said. “While the decision to retire is a personal one and can be attributed to a range of factors, it is a troubling trend that we are closely monitoring.”

The head of one of NYPD’s most prominent units, Chief of Patrol Fausto Pichardo, retired Tuesday after more than 20 years with the force, according to Fox.

“This is the highest attrition rate we have seen in over a decade, during a time we are battling enormous spikes in shootings and murders,” PBA President Patrick Lynch told Fox. “And thanks to the City Council and Mayor’s ‘Defund the Police’ lunacy, no help is coming any time soon. Our elected leaders need to be held responsible for the dangerous path they’ve chosen.”

New York City, under the direction of Democratic New York City Mayor Bill de Blasio, defunded the NYPD by more than $1 billion in the beginning of July, following calls to redirect law enforcement funding after the death of George Floyd, according to The New York Times.