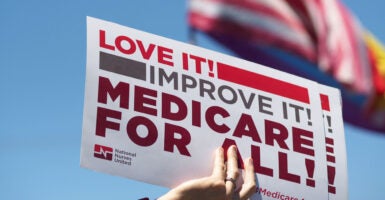 Left-wing politicians continue to push for creation of new government-run health care plans, sometimes called “single payer” or “Medicare for All,” that would replace all private and employment-based coverage. Pictured: People rally in favor of single-payer health care for all Californians outside the office of California Assembly Speaker Anthony Rendon on June 27, 2017, in South Gate, California. (Photo: Robyn Beck/Agence France-Presse/Getty Images)

Health care in America is too bureaucratic, costly, and complex.

Self-styled “progressive” politicians claim they have a “remedy” for that; namely, the creation of a new government-run health plan—sometimes called “single payer” or “Medicare for All”—replacing all private and employment-based coverage, as well as most major federal health programs, including Medicare, Medicaid, and the Federal Employees Health Benefits Program.

Some politicians are now trying to shift the narrative away from single payer with the so-called public option.

A critique of the leading public option proposals shows that the underlying policies of the public option strategy create the government infrastructure needed to move toward a single-payer system.

Armed with regulatory and statutory control, the government option would undermine and drive out private competition, and coerce provider and patient participation, while shifting costs to taxpayers, private plans, and providers.

In the end, the efforts behind the public option would lead to single payer on the installment plan.

If progressives were to enact their massive demolition project, they claim that American health care will be superior. It will usher in a new era of universal coverage and care for all 331 million Americans, higher-quality care, superior medical outcomes, and lower costs for individuals and families and the nation at large.

In “No Choice, No Exit,” our compendium of articles and essays on government-controlled health care, and both leading single-payer and public option proposals, we focus like a laser on the facts.

We examine major House and Senate legislative proposals and provide a detailed analysis of how they would amend or repeal specific provisions of the vast body of federal law that governs health care financing and delivery.

In “No Choice, No Exit,” our Heritage Foundation colleagues detail the direct financial costs and consequences for American families in higher taxes and heavier health care spending.

With the adoption of a government-run system, congressional progressives say that individuals and families will pay less for health care than they do today.

To believe that requires a powerful ideological faith. That’s because the leading House and Senate bills have no tax or financing provisions.

Forget these progressive promises. Our colleagues estimate that progressives’ national insurance program would require a tax of 21.1% of earnings, and that nearly two-thirds of America’s households would pay even more than they do today.

Likewise, progressives promise that Americans will enjoy access to higher-quality medical care. Quality, however, depends on getting the right diagnosis and the right treatment at the right time.

In “No Choice, No Exit,” our British and Canadian colleagues describe how “single-payer” health care systems deliver care in actual practice, including the long waiting lists and the delays and denials of care.

The COVID-19 pandemic has worsened that care delivery. For example, in 2019, Britain had 4.4 million people on National Health Service waiting lists. By the end of 2020, The Guardian reported, England’s waiting lists could reach almost 10 million.

In “No Choice, No Exit,” we show that both House and Senate bills erect a powerful, centralized bureaucracy that will make innumerable decisions over the delivery of care among doctors, hospitals, and other medical professionals.

If today’s Medicare program—governed by tens of thousands of pages of rules and regulations and guidelines and related paperwork—is no model of administrative simplicity, the proposed national health insurance apparatus will create an unprecedented level of bureaucratic micromanagement.

We also show that, for all practical purposes, for most Americans, there would be no exit from the system, because the House and Senate bills severely restrict the right of patients to go outside of the system to spend their own money to get the kind of medical care that they want and need.

Not even the doctors who treat us will be free to practice medicine in the way they deem best. The promises of streamlined medicine under a single-payer system are based on the facile belief that government’s involvement may make it more efficient. That’s belied not only by common sense, but also by the tens of billions of dollars spent each year on complying with government regulations.

But this is more than just a money issue. More and more, our doctors’ attention is being drawn away from the patient and toward their computers.

A confluence of entrenched billing practices and health care laws and regulations—many of them aimed at “reform”—have increasingly demanded the doctors’ time, which has the twofold effect of diminishing the quality of patient care and driving down the morale of physicians—if not driving them out of the profession entirely.

There’s no reason to think that the government will behave any differently if given complete control over medicine, but likely will continue doing what it has done—preventing doctors from being doctors.

Regardless of the outcome of the 2020 presidential and congressional elections, the health care debate will intensify.

Americans must learn to ignore politicians’ promises, and instead scrutinize politicians’ actions, particularly the legislative language of the House and Senate bills they sponsor or co-sponsor.

They will often find that the gap between rhetoric and reality is as wide as the Grand Canyon, and the tough trade-offs initially hidden from plain sight become painfully obvious upon closer examination.

You cannot competently communicate health policy with campaign bumper stickers. Americans will only preserve their personal health care freedom by paying attention to the details.