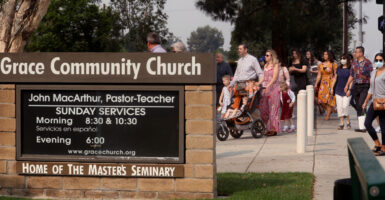 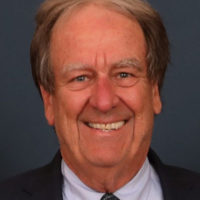 James Enstrom, Ph.D., is a retired research professor of epidemiology at UCLA and president of the Scientific Integrity Institute. He has a master's degree in public health.

Forty million California residents have been living under Gov. Gavin Newsom’s statewide lockdown order since March 19. This lockdown order—which was the first in the nation—was based on Newsom’s assessment of the health risks of COVID-19.

In Los Angeles County, 10 million residents are in lockdown, which was implemented at the county level by a series of health orders issued by the county health officer, Dr. Muntu Davis.

One aspect of this lockdown has been an effective, ongoing ban on indoor services at all churches. One church is now defying the ban: Grace Community Church in Sun Valley, a suburb of Los Angeles.

The church’s leader, Pastor John MacArthur, agreed to voluntarily comply with the March lockdown restrictions because of the original dire predictions of massive COVID-19 cases and deaths in California.

It became clear after four months that these predictions were wrong, and that the virus was not nearly as dangerous as originally feared. However, the restrictions continued to drag on indefinitely and were undermining the ability of the church to function properly.

On July 24, the Grace Community Church board decided to reopen the church, as explained in a detailed statement, titled “Christ, Not Caesar, Is Head of the Church: A Biblical Case for the Church’s Duty to Remain Open.”

The church determined that the health order was illegitimate, over-broad, and unconstitutional, because it indefinitely prevented the congregation from assembling and exercising its religion and sincerely held religious beliefs.

The church has relied upon the guaranteed religious freedom protections of the U.S. and California constitutions, and is now represented by a Thomas More Society legal team.

In response to the church’s indoor services on July 26, the Los Angeles County counsel, Mary Wickham, and five senior county council attorneys, acting on behalf of Davis, had a law firm, Miller Barondess LLP, issue a cease and desist letter on July 29.

The letter warned MacArthur that violating state and county health orders is “a crime punishable by a fine of up to $1,000 and imprisonment of up to 90 days.”

The letter was reinforced by a 97-page complaint for “violation of emergency health orders.”

I have challenged the public health validity of the cease and desist letter and the complaint by documenting the inaccuracy of the following claim:

By holding indoor services for hundreds of persons during this pandemic, you are placing the health and safety of not only the persons attending the service, but also the community at large at risk.

This unsubstantiated claim is contradicted by the fact that this health-conscious, low-risk church congregation has had no reported illness or death due to COVID-19.

Davis has refused to respond to my letter in spite of my numerous attempts made directly to him and to other county health officials, Miller Barondess, and the county council.

Davis needs to examine and acknowledge the decades of peer-reviewed epidemiologic evidence that regular church attendance is consistently associated with reduced death rates and many other health benefits, as described in my 2008 article in Preventive Medicine and a 1997 article in the American Journal of Public Health.

For instance, a representative sample of U.S. adults adhering to four simple health practices, one of which is weekly church attendance, had a total age-adjusted death rate that was only one-half of the death rate among the entire sample.

Among a representative sample of Californian adults, frequent church attenders had a total death rate that was only 64% of the death rate of infrequent attenders. Even after adjusting for other health-related factors, there was still a significant mortality reduction among regular attenders.

In addition, frequent attenders were more likely to stop smoking, increase exercise, increase social contacts, and stay married. There is much more evidence that supports the benefits of church attendance.

Thus, there is very strong evidence that the health benefits of indoor worship services far exceed the alleged health risks of COVID-19 for this congregation, which has thus far experienced no illness or death associated with COVID-19.

Rather than supporting an unconstitutional and oppressive legal complaint against the church based on invalid health claims, Davis needs to modify the current county health order to allow indoor worship services at this church.

This church and its low-risk congregation can be carefully monitored for COVID-19 risk, and can serve as a model for reopening churches, as part of a rapidly growing effort to reopen low-risk parts of American society.

This reopening strategy is described in the Great Barrington Declaration, now signed by over 10,000 public health scientists, which states:

As infectious disease epidemiologists and public health scientists, we have grave concerns about the damaging physical and mental health impacts of the prevailing COVID-19 policies, and recommend an approach we call focused protection.

Coming from both the left and right, and around the world, we have devoted our careers to protecting people. Current lockdown policies are producing devastating effects on short and long-term public health …

The most compassionate approach that balances the risks and benefits of reaching herd immunity is to allow those who are at minimal risk of death to live their lives normally to build up immunity to the virus through natural infection, while better protecting those who are at highest risk.

Rather than condemning the Great Barrington Declaration and ignoring thousands of public health scientists, including me, Davis must objectively and promptly act in response to the overall health evidence that justifies reopening low-risk churches, like Grace Community Church.