The Irrational, Erroneous Assumptions of Sanctuary Cities and States 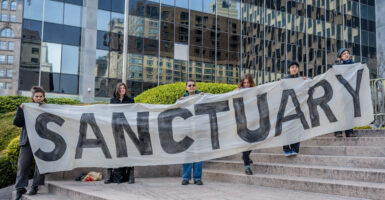 Immigration and Customs Enforcement last week completed a weeklong targeted enforcement operation that resulted in the apprehension of more than 125 at-large criminal illegal aliens across the "sanctuary" state of California. Pictured: A "sanctuary" banner is displayed at Foley Square outside the immigration court building in New York City on Jan. 23. (Photo: Erik McGregor /LightRocket/Getty Images)

If space aliens came to Earth and saw what happens every day in California (and other states) regarding so-called sanctuary cities, they would leave our planet immediately, firmly convinced we were all nuts.

The sanctuary city laws that predominate in liberal states such as California make no sense, and put American citizens—and nonviolent illegal aliens—at huge risk, all in the name of supposed “compassion.”

There are two sets of conflicting assumptions here.

The left justifies sanctuary city laws with specious claims (compassionate, protection, abating fear, stopping Immigration and Customs Enforcement from targeting “innocent” people). It also falsely claims that this frees local law enforcement from being required to “do ICE’s job for it.”

The left says this somehow justifies refusing to cooperate, implying it would be holding simple hardworking individuals about to be released just so ICE can have the opportunity to take them into custody.

All of that is nonsense.

The conflicting view—one based on facts and statistics—is that nearly 90% of those illegal immigrants for whom ICE has lodged a detainer request are convicted (not just suspected) violent criminals.  These are not random family members who “looked suspicious” on a street corner.  They are by-name requests for the lawful transfer of hardcore felons with violent records.

Additionally, ICE has a policy of not picking up and removing illegal immigrants who are witnesses to crimes.

ICE just completed a weeklong targeted enforcement operation that resulted in the apprehension of more than 125 at-large aliens across the state of California, where sanctuary policies have largely prohibited the cooperation of law enforcement agencies in the arrest of criminal aliens.

If ICE had been able to simply walk into a city or county jail or state facility and pick up the convicted violent criminal that had been asked for, how many fewer crimes would have been committed in between their release and subsequent apprehension?

Would it not make more sense, compassionate or  otherwise, for those miscreants to remain in custody of law enforcement, rather than release them back into the neighborhoods that they had preyed upon and, too often, have done so again?

They would have gone directly from state or local custody into ICE control for their deportations, rather than allowing them to victimize people again, and possibly endanger more bystanders and the federal agents who now have to tackle a potentially armed suspect during a second arrest scenario.

No one expects the state and local cops to do ICE’s job of federal immigration law enforcement, but holding an identified, convicted violent criminal until ICE can arrive, sign for them, and take them with no dangerous break in custody only makes common sense.

Except in states such as California, I guess.

Sanctuary city laws should be banned. If that’s not possible, that city’s federal aid packages should be reduced by the costs the feds accrue to do their jobs under such absurd strictures, and any costs for federal authorities to mitigate the damage done by the criminals deliberately released by the sanctuary jurisdiction.

This craziness must stop. America’s leaders have a responsibility to maintain law and order. Federal immigration laws should not be ignored because liberal politicians disagree with the law of the land.

If you think the immigration statutes are wrong or unnecessary, get them changed by Congress. Allowing states and cities to pick and choose what federal laws they will follow is corrosive to American society.