Barrett Addresses Attacks on Her Adopted Children From Haiti 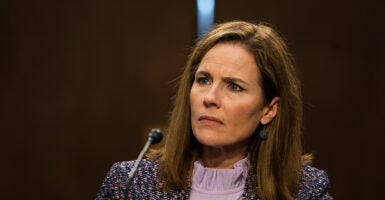 “They are my children who we love and who we brought home and made part of our family,” Barrett said, “and accusations like that are cruel.”

“They are my children who we love and who we brought home and made part of our family and accusations like that are cruel.” pic.twitter.com/tgrhUe2zM4

Media figures have suggested that Barrett adopted two of her seven children, Vivian and John Peter, from Haiti for nefarious reasons. Next Gen America Managing Director John Lee Brougher said he needed to “know more about the circumstances” of how Barrett adopted her children and “the treatment of them since.”

“Transracial adoption is fraught with trauma and potential for harm, and everything I see here is deeply concerning,” he said.

Adoption is one of the most beautiful things that exists in the world, and while — like everything, including biological families — it can foster abuse, casually insinuating that for adoptive parents is despicable.

And yes, @DrIbram, it matters that you used the wrong picture: pic.twitter.com/yyNs67lNGS

Democratic activist Dana Houle said he would “love to know which adoption agency Amy Coney Barrett and her husband used to adopt the two children they brought here from Haiti.”

“Does the press even investigate details of Barrett’s adoptions from Haiti?” he asked. “Some adoptions from Haiti were legit. Many were sketchy as hell. And if press learned they were unethical and illegal adoptions, would they report it? Or not, bc it involves her children.”

He continued: “Would it matter if her kids were scooped up by ultra-religious Americans, or Americans weren’t scrupulous intermediaries and the kids were taken when there was family in Haiti? I dunno. I think it does, but maybe it doesn’t, or shouldn’t.”

And Center for Antiracist Research Director Ibram X. Kendi tweeted: “Some White colonizers ‘adopted’ Black children. They ‘civilized’ these ‘savage’ children in the ‘superior’ ways of White people, while using them as props in their lifelong pictures of denial, while cutting the biological parents of these children out of the picture of humanity.”

“And whether this is Barrett or not is not the point,” he continued. “It is a belief too many White people have: if they have or adopt a child of color, then they can’t be racist.”

Some White colonizers “adopted” Black children. They “civilized” these “savage” children in the “superior” ways of White people, while using them as props in their lifelong pictures of denial, while cutting the biological parents of these children out of the picture of humanity. https://t.co/XBE9rRnoqq