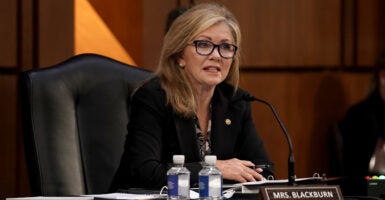 “You know there is a double standard when it comes to how the left and the media treat conservative women, as opposed to how they treat liberal women,” Blackburn, R-Tenn., a conservative  member of the Senate Judiciary Committee, said after the hearing at a virtual press conference sponsored by Heritage Action for America.

“You’ve had 164 American citizens who have stood before that committee to be a Supreme Court justice. That’s throughout our nation’s entire history,” Blackburn said. “Today was only the fifth time that an American citizen has been a female judge.”

“Look at how they are treating her,” she added. “Just as the media treats conservative women differently, they are doing the same thing to Judge Barrett. They want to send a signal, if you are pro-life, pro-family, pro-religion, pro-business, pro-military, they do not think your voice counts, because you are not in agreement with what the left says should be ‘women’s issues.’”

Blackburn was joined by other members of Congress, along with a number of conservative leaders.

President Donald Trump nominated Barrett, now a judge on the 7th U.S. Circuit Court of Appeals, for the high court on Sept. 26  to fill the vacancy of the late Justice Ruth Bader Ginsburg, who had died eight days earlier.

Blackburn also noted that Barrett, if confirmed, would be the first mother of school-aged children to serve on the high court.

“For all working moms, this means so much for us today,” Anderson said at the virtual press conference. “She represents so many of us that have children and are also pursuing a career.”

Anderson went on to note her strong “incredible, impeccable record” as a jurist.

“She is an originalist, a constitutionalist, and we are all eager to see her move forward, first with the Senate judiciary and second to the Senate floor,” Anderson said.

Since then, some Democrats and some in the media have attacked Barrett’s Catholic faith.

Penny Nance, CEO of Concerned Women for America, said opponents of Barrett are embracing a risky strategy with what she called their “bigoted ‘handmaid’ claims.”

Some Democrats and liberal commentators likened Barrett’s membership in a Christian organization to women being handmaids similar to the Margaret Atwood novel and Hulu TV series “The Handmaid’s Tale,” a dystopian tale in which women are property of their husbands.

“We believe it is time for a woman of faith, for a working mom to be on the court and represent our perspective,” Nance said. “I’m reminded that Ruth Bader Ginsburg felt very strongly that women were to serve on juries because she thought correctly that for us to be able to judge other women, that our perspective was needed. I will say that as well about the Supreme Court. There has never been a conservative constitutionalist woman on the Supreme Court. We are, as conservative women, an underrepresented group on the court and in government.”

Rep. Mike Johnson, R-La., chairman of the conserative Republican Study Committee in the House, said he had previously suggested Trump nominate Barrett because she is “the natural inheritor of Justice [Antonin] Scalia’s legacy.”

Barrett clerked for Scalia, who was known for his originalism and served on the high court from 1986 until his death in 2016.

“I’ve spoken to the president on multiple occasions over the past couple of years that she should indeed be the nominee for the next vacancy on the court,” Johnson said.

“When I had a few minutes to talk to him about Amy Coney Barrett over the last couple of years, I said, ‘You know, Mr. President, she is the natural inheritor of Justice Scalia’s legacy.’ President Trump had committed to the American people that he would nominate someone like Scalia,” Johnson said. “I said, ‘Mr. President, you can’t find a better person because she clerked for him. She studied the Constitution under him, the great master that we all revere him to be. She’s cut out of the same mold. You know exactly what you will get with this jurist. She will be an originalist. She will adhere to the original intent.’”