How California Is Turning Into a State Governed by Identity Politics 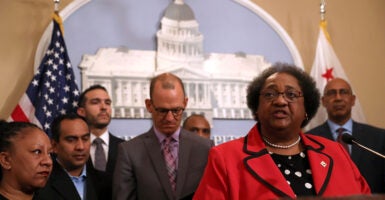 If you thought racial identity politics were just a fleeting flirtation of the radical left, California’s new laws suggest otherwise.

On Sept. 30, California Gov. Gavin Newsom signed into state law a bill setting up a nine-member board to study the amount of reparations that should be owed to black people for slavery and Jim Crow.

But that’s hardly the only racially divisive law California has passed this year, since the Legislature convened in a coronavirus-racked session in June.

This is identity politics at its most extreme level, setting racial quotas for prominent positions of influence.

Newsom also signed a bill that would mandate that the California State University system establish a social justice course requirement for all students. According to the bill’s text, schools in the California State University system will be required to have students take a course in either black, Hispanic, Native American, or Asian studies, with professors in the departments uniformly dominated by the academic left.

But no measure may be more insulting that the one the Legislature passed earlier in the year, a California constitutional amendment ballot measure that would—unless rejected by voters on Election Day—repeal California’s anti-discrimination ordinance known as Proposition 209.

Proposition 209, enacted by voters in referendum in 1996, reads:

The state shall not discriminate against, or grant preferential treatment to, any individual or group on the basis of race, sex, color, ethnicity, or national origin in the operation of public employment, public education, or public contracting.

Fortunately, according to one poll, the repeal measure, Proposition 16, is trailing badly in the polls.

But the California Legislature does not govern according to the will of the voters. It has shown throughout 2020 that it governs through the narrow prism of identity politics.

And in that prism, several radical progressive leaders have taken the lead. Chief among them is Shirley Weber, a San Diego-area assemblywoman who sponsored the Proposition 209 repeal, the ethnic studies requirement, and the reparations task force bill.

Not every law enacted this session in the name of social justice specifically invokes race. One of those is a law signed by Newsom that will eliminate some fees that are typically collected from and billed to people who are arrested and jailed, and put through the trial system.

The difference between that law and the aforementioned “social justice” laws is that the debt-elimination law applies to all ex-convicts, while the other laws explicitly call for dividing—even discriminating—against people based on their race, ethnicity, or other demographic characteristics.

Those in political power in California seem intent on passing laws that would have the effect of dividing and racializing the government. Perhaps they sympathize with the neo-Marxist theory that assumes that there are two competing groups that must perpetually be in conflict with one another. That kind of thinking does not incentivize reconciliation and mutual trust. It prefers that people remain divided and that group lines harden.

Or it could be that they see themselves as leaders of their so-called identity group to gain more power and influence, on the assumption that people in their identity group tend to think a certain way—that is to say, their way.

As such, it’s not a surprise that Weber is also the chairwoman of the California Legislative Black Caucus, which claims to “advocate for the interests of black Californians.”

But one of the consequences of identity politics ideology on people of different ethnic origins is to make it difficult for them to think they can participate fully in the American experiment.

In his new book “The Plot to Change America: How Identity Politics Is Dividing the Land of the Free,” Michael Gonzalez of The Heritage Foundation writes that it is to neo-Marxist schools of thought that “we owe the view … that certain groups—workers, minorities, women, and others—are ‘marginalized’ and that these groups participate in their own oppression when they perpetuate the hegemonic metanarrative of the privileged.”

That means that, according to the neo-Marxists, minorities who buy into the idea that America is in fact a land of opportunity are actually participating in the ideology of their oppressor. Neo-Marxists would rather fashion minorities into perpetual victims, subject to the helping hand of the government.

That’s not the path of opportunity for minorities who really need opportunity. That’s the path of perpetual grievance politics, locking in a mindset that will hurt, not help, their aspirations.

Making matters worse, California is a liberal bellwether and what happens there is highly influential across the rest of the country. California’s descent into identity politics wokeness likely will have similar adverse consequences for other liberal states.