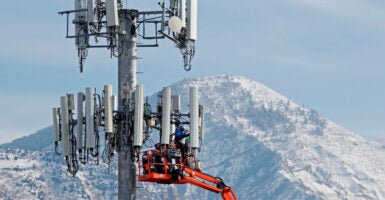 The Department of Defense’s apparent interest in developing a national 5G network ignores the great strides that private-sector entities have made in developing and deploying 5G networks. Pictured: A contract crew for Verizon works on a cell tower to update it to handle a 5G network in Orem, Utah, on Dec. 10, 2019. (Photo: George Frey/AFP/Getty Images)

The Department of Defense appears to be making an unpopular move to develop a national 5G network, an idea that seemed dead on arrival following near-universal opposition in 2019. Among those opponents is President Donald Trump.

On the surface, the idea may seem admirable: a secure 5G network to compete with China. China is undoubtedly a huge problem when it comes to global dominance, as they are making a determined push to control and dictate the world’s wireless communications networks. They have made inroads, because they are leveraging their governmental control of so-called private sector entities in ways democracies cannot, should not, and don’t want to.

But then I started to read between the lines.

The U.S. is maintaining its leadership in 5G, and the nation’s carriers are already far into their respective deployments of secure 5G networks. The DOD’s recent request for information for a single, nationwide wholesale network will not lead to a tangible solution to the race to 5G, rather it will lead to a solution in search of a problem.

Driving a DOD-centric, or a DOD proxy-centric, solution is a fool’s errand. It is founded on a belief that the federal government can move faster and more effectively than the private sector. This has not been true for decades.

This assumption ignores the great strides that have been made by the existing American players on the 5G field already. These private sector companies are the repositories of the expertise and experience in the telecom field, not the government. Thinking that the government or a jerry-rigged organization with political connections will somehow pull together the expertise out of thin air is nonsense.

The feds cannot hire away enough cybersecurity experts to adequately defend themselves—how are they going to find the engineers and scientists to do this regardless of the time constraints, let alone do it fast?

This effort will almost certainly slow down the drive for a new network, not speed it up. It will also add great insecurity, as a single network is far more vulnerable than the multiple diverse networks that the private sector is developing.

One national-level, wholesale network might be an answer for Luxemburg, but not for the United States of America. That is why nearly 20 Republican senators, led by Sen. John Thune, R-S.D., recently urged the president to embrace our country’s current approach to 5G.

The government as a whole has a role. As parts of the spectrum currently owned by DOD are shared or sold off to the private sector, the Pentagon should be the one ensuring the equities of the military are protected during this process, but they should not be leading the overall effort to develop a new 5G network.

Rather than following the Chinese model of governmental hegemony, our departments of State, Commerce, and Treasury should be in a supporting role, making a concerted effort to reduce regulatory restrictions on our private sector, to open doors to overseas markets, and to protect our companies from retaliatory policies by other governments.

Rather than trying to be the quarterback of this game, they should be the offensive line, blocking and clearing the way, but letting the private sector call the plays.

I applaud DOD for realizing the importance of 5G leadership, including its work with the National Telecommunications and Information Administration to clear 100 megahertz of mid-band spectrum for auction. However, we must fight the misguided tendency to think the federal bureaucrats can stand up a nationwide 5G network quickly and operate it effectively. They most assuredly cannot.

Turn loose the engine of the private sector, supported by the government. This works. The reverse does not, and we must not swallow the myth that it will.