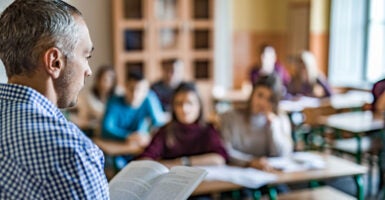 The school board of Loudoun County, Virginia, is poised to foist a radical new code of conduct policy onto teachers and students. (Photo: skynesher/Getty Images)

What has gotten into the water in Virginia?

The commonwealth has quickly gone from a purple-state battleground to embracing a kind of left-wing extremism that makes California seem almost normal by comparison.

The latest insanity comes from Loudoun County, where the school board is set to vote on a radical new code of conduct policy that is akin to something you may see in the defunct Soviet Union or in Communist China.

It should be noted that it was reported in late September that Virginia’s Fairfax County Public Schools paid Ibram X. Kendi, a leading purveyor of critical race theory, $23,000 to give a one-hour lecture to its staff.

Kendi is the author of “How to Be an Antiracist,” whose ideas, ironically, sound a lot like racism and encourage ruthless tyranny to boot.

Loudoun’s proposed new policy, which will be put up to a vote in the school board on Oct. 12, will essentially enforce critical race theory in the public and private lives of teachers and school staff through a code of conduct.

According to a draft of a policy, “Any comments that are not in alignment with the school division’s commitment to action-oriented equity practices” will be subject to punishment.

“The proposed change would cover all communication by Loudoun County Schools’ employees, on campus or off, by telephone, in person, or on social media,” according to a report from West Nova News.

In addition, any kind of speech perceived as “undermining the views, positions, goals, policies or public statements” of Superintendent Eric Williams or the school board will not be tolerated.

Employees will be directed to report anyone who does not follow the guidelines.

Remarkably, the document says the new policy shouldn’t be “interpreted as abridging an employee’s First Amendment right to engage in protected speech.”

Oh wait, there’s more: “ … however, based upon an individualized inquiry, speech, including but not limited to via social media, on matters of public concern may be outweighed by the school division’s interest in the following.”

The following includes: “Achieving consistent application of the board’s and superintendent’s stated mission, goals, policies and directives, including protected class equity, racial equity, and the goal to root out systemic racism.”

Again, this does not just apply when staff are working in an official capacity at school, but whenever they say or do anything on campus or off.

Oh, but don’t worry, your right to free speech is perfectly safe as long as you follow the party line at all times.

This reminds me of that old joke about a Russian commissar saying there is freedom of speech in the USSR, just like in the United States. In America, you could go to the White House and yell “Down with Ronald Reagan!” without being arrested. And in Moscow, you too could walk down to the Red Square and yell “Down with Reagan!” and not be arrested.

As Rod Dreher, a columnist and author, wrote for The American Conservative, Loudoun’s proposed standards leave out the phrase “critical race theory.” However, they adopt it in practice.

If you read through the school district’s “equity plan,” Dreher noted, it “involves manipulating passing grades and school suspension rates to achieve ‘equity’—that is, to reward or punish people based not on their conduct and accomplishments, but on their race and ethnicity.”

Critical race theory is not, as some may believe, simply an element of “sensitivity training.” It is a theory, rooted in Marxism, that reduces all issues down to race, where there are only oppressors and the oppressed. Its promotion of “equity” is at odds with the concept of equality under the law as well as the basic tenets of a free society.

Critical race theory will not only be foisted on teachers and students of Loudoun County Public Schools, it will be accepted without question if the new code of conduct policy is adopted.

These tyrannical and intellectually bankrupt ideas are no longer consigned to radical corners of American college campuses, they are coming to a school near year.

This is why parents need options to pressure their schools to abandon this madness, or at the very least ensure that their children will not be subjected to nonstop and enforced indoctrination.