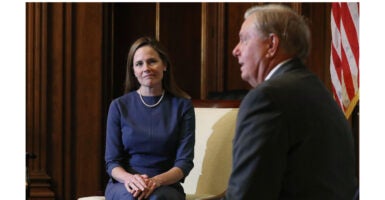 To many Americans, the word “jurisdiction” conjures up memories of old G-men movies, in which local police and dark-suited FBI agents argue about who gets to call the shots.

To judges, however, it conjures up a different question: Who, if anyone, gets to hear a case?

There are good reasons for putting limits on federal jurisdiction.

What’s more, the doctrine of “personal jurisdiction” protects individuals’ due process rights by preventing them from being dragged into a faraway court in a state where they have no meaningful contacts.

And finally, jurisdiction confines the courts’ power to the disputes before them, thus preventing judges from roving the country declaring rights and responsibilities willy-nilly.

A good federal judge takes jurisdiction seriously and is willing to limit his or her own power to prevent the judicial power from creeping out beyond the boundaries set by Article III of the Constitution.

Barrett, however, noticed something that they missed. Writing for the majority, she said that “the case [was] really about federal jurisdiction.” The parties did not raise the issue until the panel of judges asked them to, but upon review, the judges concluded that they did not have jurisdiction to hear the case.

First, the amount of money at issue was insufficient to reach the threshold for “diversity” jurisdiction—that is, jurisdiction arising from big money, state law claims between residents of different states.

And second, the case involved no questions of federal law for the court to interpret. Accordingly, it was not the federal courts’ business to decide this state law case, and Barrett ordered that the case should be sent to state court, where it belonged.

Webb v. FINRA shows that not only does Barrett appreciate that the federal courts should not trample on the prerogative of state courts to decide state law cases, it also shows that she is actively avoiding doing so even when the parties fail to raise the issue.

She looked, without prompting, into jurisdiction again in Wisconsin Central v. TiEnergy (2018), in which the court, on its own initiative, examined whether it had jurisdiction. It concluded that it did, showing that Barrett was not willing to cut that important corner.

Another case, Ariel Investments v. Ariel Capital Advisors (2018), shows that Barrett is careful not to expand the geographic reach of her court beyond its borders. There, Barrett joined an opinion by Judge Frank Easterbrook holding that a Florida company couldn’t be hauled into an Illinois federal court when it did no business in that state, even though it allegedly infringed the trademark of an Illinois-based business.

The plaintiff argued that infringing an Illinois-based business’ trademarks gave rise to jurisdiction because the defendant knew that it was causing harm in Illinois.

Barrett and the other judges rejected that expansive view of her court’s reach, concluding that state law and Supreme Court precedent required some intentional actions by the defendant reaching into the state before the court could take up the case.

Barrett also faithfully applies other doctrines that keep courts from expanding their power beyond Article III.

One such doctrine is called “standing,” which stems from Article III’s limitation of the judicial power to consider only actual “cases” and “controversies,” and therefore requires that a plaintiff have suffered a real injury before a court can hear his or her claim.

In one case, Barrett wrote an opinion holding that a purely procedural violation of the Fair Debt Collection Practices Act did not create standing. In another opinion written by Barrett, the court held that “indignation” is not an injury that gives rise to standing. And in yet another, she similarly held that mere “concerned bystanders” have not suffered a real injury.

On the other hand, when Congress has made clear in statutes that it intends to create causes of action based even on very tiny injuries, Barrett has respected Congress’ power to do so.

In Gadelhak v. AT&T Services, decided early this year, Barrett wrote an opinion holding that even a single, unwanted text message was sufficient to confer standing to bring a lawsuit under the Telephone Consumer Protection Act.

That suggests that Barrett agrees with Justice Clarence Thomas’ view (based on the original meaning of Article III) that “Congress can create new private rights and authorize private plaintiffs to sue based simply on the violation of those private rights.”

Taken all together, Barrett’s jurisdiction and standing cases show that she is careful with the judicial power and does not see it as a judge’s job to declare rights and responsibilities free from Article III’s constraints.

But she respects that Congress does have the power to declare rights and responsibilities with considerable latitude (within constitutional limits, of course), and Barrett has faithfully applied such laws when Congress duly passes them.

To put a finer point on it: Far from a judicial activist, Barrett is very careful to limit her own power while respecting Congress’ greater authority to do whatever is constitutional, necessary, and proper.