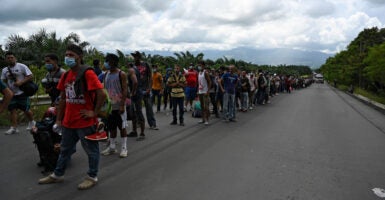 Honduran migrants, part of a caravan that was headed to the U.S., march in Entre Rios, Guatemala, after crossing the border from Honduras on Oct. 1. The caravan, of at least 5,000 people, had left Honduras the day before, but was broken up by Guatemalan authorities working in cooperation with U.S. officials. (Photo: Johan Ordonez/Agence France-Presse/Getty Images)

A year ago, it looked like there was no stopping the administration’s plan to secure the border and stem the tide of illegal immigration.

Today, that prediction looks about right.

Just a few days ago, a caravan aiming at the U.S. border to coincide with the election campaign was broken up in Guatemala in cooperation with the United States.

At the same time, Border Patrol Chief Rodney Scott announced the completion of the construction of 350 miles of wall on U.S.-Mexico border and concluded the government was well on the way to completing the target of 450 miles by the end of the year.

Both of these events demonstrate that the U.S. had achieved unprecedented accomplishments in gaining operational control of the border.

Few threats are a greater present danger to American peace, public health, and prosperity than an unsecured border.

In an age of pandemic, the notion of uncontrolled borders is near-suicidal.

There are many other concerns as well. An open border is a cash cow for transnational criminal organizations, such as gangs and cartels. Their activities, in turn, endanger lives and property across the country, not just in border communities.

For example, in addition to COVID-19, there is another plague sweeping across America; namely, an opioid crisis.

Drug smuggling is contributing to an unprecedented spike in overdose deaths, and over the past decade, the number of victims has dwarfed the numbers who have succumbed to the coronavirus.

Further, drug smuggling is just one of the serious crimes that flourishes across on uncontrolled border. Another is human trafficking. Trafficking in persons is a serious crime and a gross violation of human rights.

Traffickers are involved and profit from every facet of illegal migration, in addition to perpetrating many crimes against illegal migrants, including rape, robbery, extortion, and killings.

Over the past few years, more has been done to effectively secure the border than the previous two decades.

Part of that success resulted from working with Mexico and the nations of Central America, which also suffer the negative effects of illegal migration flows.

This cooperation is, in fact, unprecedented.  “We will not allow any foreigner who has used illegal means to enter the country,” declared Alejandro Giammattei, the president of Guatemala, after breaking up the most recent migrant caravan, promising to detain anyone who illegally enters the country and to repatriate them.

Cooperation works hand in hand with efforts to secure the U.S. border.

What distinguishes the border effort is both the effectiveness of the wall and its location.  The barriers being built now are not only more robust, but the administration also has put walls where the Border Patrol says it really needs them to block the most prevalent and dangerous smuggling corridors into the United States.

It’s without question that the wall has been effective. Illegal flows are down and deportations at the border are up. Further, the Homeland Security Department increasingly is seeing tractor-trailers loaded with migrants attempting to cross the border because the wall has proven such a serious obstacle.

For example, the Border Patrol’s Rio Grande Valley and Laredo sectors in Texas for years traditionally have been active routes into the U.S. This year, the two sectors have seen more than 226 tractor-trailer cases, with 3,740 individuals, a 37% increase from the year before.

With a more secure border, the department can focus more resources on the border crossings.

“Smugglers are unscrupulous criminals and will stop at nothing to enrich their pockets, even if it involves locking human beings in trailers intended for animals,” acting Customs and Border Protection Commissioner Mark Morgan said, adding:

They treat illegal aliens as a commodity, inhumanely holding them captive in overcrowded stash houses with limited access to food and water.

By working with other countries, securing our border and enforcing immigration laws, our government can better protect us and dismantle the criminal networks exploiting all of us.

On Oct. 20, The Heritage Foundation will host “The State of the Wall and Immigration,” an in-depth virtual event assessing border security, immigration enforcement, and reform efforts, and where we need to go from here.