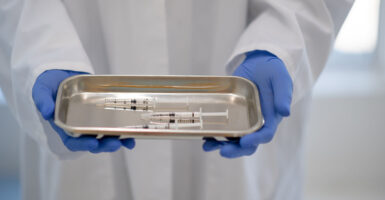 Safe injection sites are not as popular as activists had hoped, even in a country as progressive as Canada, and for good reason.  (Photo: FatCamera/Getty Images)

If you’ve never heard of “safe injection sites”—public facilities for drug users to consume heroin, fentanyl, and methamphetamine under the supervision of medical staff—you probably will soon. In cities such as Philadelphia, Denver, and San Francisco, drug legalization activists have launched a campaign to create such sites.

When challenged, activists point to Canada, which they have long cited as a model of enlightened drug policies. In their policy proposals and campaign literature, drug legalization advocates argue that safe injection sites in Canada—particularly the Insite facility in Vancouver, British Columbia—have prevented overdose deaths and saved lives.

They should ask a few Canadians. In cities throughout the Great White North, a group of insurgent leaders has begun to turn against safe injection sites—and they are winning with voters. Since 2016, anti-safe injection site candidates have won the premierships of Ontario, Alberta, and Manitoba.

Their argument is simple: Safe injection sites have not delivered on their promises and have caused a significant increase in trash, crime, and disorder. Public health experts have built safe injection facilities with little public input, creating problems for long-time residents.

As Ontario Premier Doug Ford told reporters: “If I put (a safe injection site) beside your house, you’d be going ballistic.”

Activists—who never seem to live within shouting distance of these sites—often respond that “privileged” neighbors must shoulder the burden in pursuit of “saving lives.” But an emerging body of evidence suggests safe injection sites may cause more harm than good.

In Alberta, public health authorities released a bombshell report that showed the sites did not reduce overall overdose deaths or opioid-related emergency calls. And they led to an increase in crime, discarded needles, and social disorder in surrounding neighborhoods.

Residents complained that they were not involved in the process and felt “less safe than before.” After the release of the report, Alberta Premier Jason Kenney announced that the provincial government would consider closing or relocating some of the safe injection sites.

Politically, critics cannot dismiss this major reversal as happening in conservative or backwater provinces. Ontario, Alberta, and Manitoba are three of the five largest Canadian provinces, and home to the progressive urban populations of Toronto, Calgary, and Winnipeg. Premiers Doug Ford, Jason Kenney, and Brian Pallister all rose to power as political insurgents, challenging the ideology of “harm reduction” and channeling public frustration about safe injection sites.

What does this mean for the United States?

First, the activist narrative on harm reduction—that it saves lives without collateral costs—cannot be maintained. Safe injection sites have an extremely poor record of moving drug users into treatment and recovery, with some referral rates as low as 1%.

As a result, neighborhoods that host safe injection sites, like the Downtown Eastside in Vancouver, often devolve into open-air drug markets, with hundreds of homeless addicts sleeping in the streets. This, of course, only compounds the problem and externalizes the social costs onto neighbors and small businesses.

Although American harm reduction activists have firmly embedded themselves in the social service bureaucracy of major cities, there is no guarantee that their ideas will come to fruition.

Already, in some American cities that have come closest to implementing safe injection sites, there are echoes of the Canadian uprising.

Earlier this year, Philadelphia announced it would open the nation’s first safe injection site, then quickly reversed course after working-class residents in South Philadelphia rebelled against the plan.

Moving forward, opponents of “harm reduction” in the United States must build on these successes and develop a coordinated strategy to prevent the establishment of safe injection sites. American political leaders can learn an important lesson from their Canadian counterparts: There is no such thing as safely using heroin, fentanyl, and methamphetamine.

Voters have a greater understanding of this simple truth than harm reduction activists and ideologically committed public health officials. It’s up to savvy political leaders to turn this key insight into political power.